Bank to the future 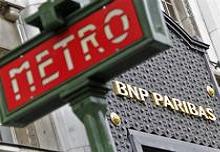 Europe’s banking union could reignite cross-border bank mergers. Spooked by financial and euro zone crises, national regulators have pressed their charges to retrench to domestic markets. But the arrival of a single supervisor and central bailout fund could revive the M&A frenzy seen earlier in the decade.

From 2000 to 2007, Europe’s big banks pulled off deal after deal across the single currency area. UniCredit bought German bank HVB, BNP Paribas splashed out on Italian lender BNL, and Credit Agricole acquired Greece’s Emporiki. The logic was that, as the single market evolved, economies of scale would give bigger players a crucial advantage.

Right now, that logic looks pretty flawed. The financial crisis showed that national taxpayers were on the hook for their banks’ expansionist ambitions. And fears of a euro zone break-up have prompted regulators to fortify their domestic banking systems. Most big European lenders have shrunk their foreign loan books, while Germany’s BaFin has made UniCredit hold high levels of capital in its HVB subsidiary, reducing the capital flexibility that should be one of the benefits of scale.

Banking union could reverse this fragmentation. The creation of a permanent bailout fund, as well as common resolution and deposit guarantee schemes, should break the link between banks and their home countries. That will reassure banks with operations in multiple countries, and encourage lenders mulling cross-border expansion.

The M&A revival could take different forms. Non-European investors could swoop while valuations are still cheap. Alternatively, national regulators wanting to maintain domestic influence could push for defensive mergers. The shotgun marriage between National Bank of Greece and rival Eurobank may be a precursor of similar deals elsewhere.

Regulators and investors will remain wary. The 2007 carve-up of Dutch lender ABN AMRO – by far Europe’s biggest bank deal to date – is a salient reminder of how badly M&A can go wrong. Political squabbling over banking union, and the euro zone’s ongoing travails, may also mean this trend takes time to develop. But as long as genuine banking union is on the cards, bank boards will be dusting down their merger plans in 2013.

The Paris headquarters of the BNP Paribas bank is seen near a Paris Metro sign, April 26 2012. REUTERS/Mal Langsdon