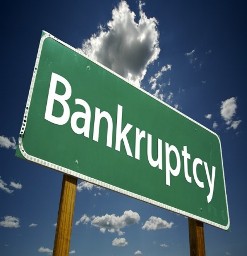 Granted, the three cities, which also include Stockton and Mammoth Lakes, are hardly bustling metropolises – each has a population of less than 300,000. But California, home to the glamorous Silicon Valley and Los Angeles, has the high taxes, big government and heavy regulation that are characteristic of major metropolitan areas.

That makes it especially tough for cities in the state’s heartland that can’t attract the glitterati. They have also been hammered by the housing market bust. Throw in rising pension costs and terrible governance and it’s likely that other towns will turn to the courts to remedy their woeful finances.

Yet municipal bond yields on lower-rated debt actually fell 0.06 percentage point to just 3.71 percent in the days after Stockton and Mammoth Lakes turned to the courts. Compare that to the height of muni madness two years ago, when investors feared a wave of defaults would rip through the $3 trillion market. Yields then topped 5 percent.

So what gives? First, the hysteria in 2010 was overblown. Bankruptcy is, and should be, the last resort for cities and counties who have exhausted all other options. As San Diego and San Jose have shown this year, governments can deploy more creative initiatives to plug budget shortfalls.

That said, investors can’t afford to be too blasé either. Aggressive court tactics could sting them. Stockton officials, for example, have called for bondholders to share the pain doled out to creditors – a departure for a market accustomed to being paid in full in the rare case of default. Additional filings could also make investors more skittish about lending to other municipalities pinched by depressed revenue and escalating pension costs. At the very least, that would mean rising borrowing costs.

Three small bankruptcies are no reason for bondholders to lose perspective. But they shouldn’t trust their life savings either, at least not to California’s municipalities.

City officials in San Bernardino, a city of about 210,000 residents located 65 miles east of Los Angeles, voted to file for Chapter 9 bankruptcy on July 10, making it the third California city in less than two weeks to seek court protection from creditors. Stockton, a city of around 300,000 about 90 miles outside San Francisco, filed for bankruptcy on June 28. Mammoth Lakes, a mountain resort town, filed on July 3.

Municipal defaults have been rare over the past four decades, especially among cities and counties. The vast majority of defaults, nearly three-quarters, occurred in borrowings that financed housing- or health-related ventures, according to a Moody’s Investors Service report published on March 7.