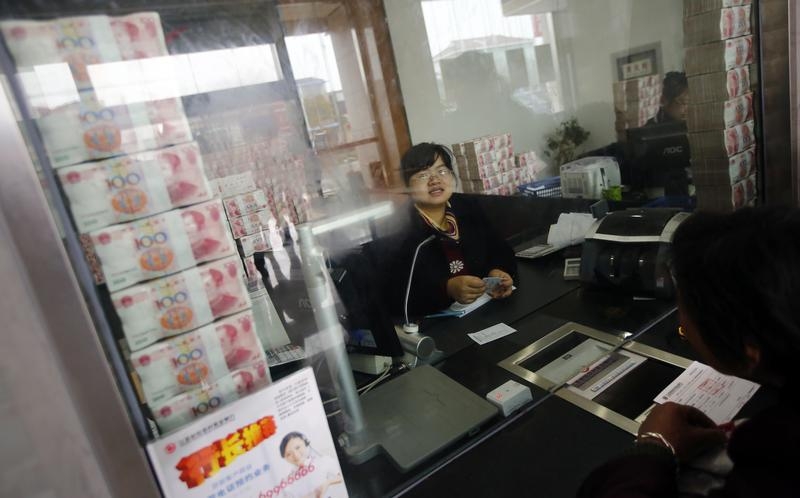 If China’s stocks are partying at the punch bowl, then its banks are nervously jangling the car keys in the kitchen. Share prices of the big lenders have lagged the wider market during its recent run-up. Based on their performance in the first three months of 2015, investors’ sober view is the right one.

The biggest five banks reported a miserable sub-2 percent increase in earnings for the quarter, year on year. Two rate cuts have pressured their lending rates, and fees from other lines of business have slowed. A bigger drag is borrowers who can’t or won’t pay up. While bad debt levels are still low, charges for credit that hasn’t yet gone bad but might are leaping. These items increased by 73 percent year on year at China Minsheng Bank, and more than 50 percent at Agricultural Bank and Industrial Bank of China.

The valuations of big banks like ICBC, China Construction Bank and Bank of China are also burdened by the lenders’ role in big government schemes that are still not properly sketched out. Take the plan to reform local government finances by swapping some of the estimated 16 trillion yuan ($2.6 trillion) borrowed by regional authorities into new bonds. The new securities could leave banks holding the same credit risk in a different form, at deceptively low rates of interest.

China’s ambitions for global greatness also raises questions. Plans to roll out infrastructure under the clunkily named “one belt, one road” strategy are likely to involve hefty lending commitments. That may bring glory, but also pressure on banks to lend to projects that may take years to generate cash flows. In the meantime, if growth slows more at home, further rate cuts will add pressure to lenders’ margins.

Being the designated driver of a slowing economy may have its advantages, like gratitude and a sense of purpose. But fun isn’t on the agenda as things stand. Chinese banks are likely to be stuck with valuations of little more than their net asset value for some time – and a role in soothing everybody else’s hangover.

An employee of Jiangsu Sheyang Rural Commercial Bank talks to a customer at one of the banks branches in Yancheng, Jiangsu province, March 26, 2014.

Chinese banks reported a slowdown in earnings growth between the first quarter of 2015 and the same period a year earlier, with the biggest five lenders all registering increases of less than 2 percent.

Industrial and Commercial Bank of China, China Construction Bank, Agricultural Bank of China and Bank of China all said that their annualised returns on equity (ROE), a popular measure of profitability for investors, fell year on year. Bank of Communications’ returns increased by a percentage point.

China’s central bank cut lending rates twice, in November and then March, in response to slowing economic growth, theoretically reducing the returns banks get from making loans. In practice, the gap between average interest on assets and liabilities remained flat for several big lenders during the first quarter, including Bank of China.