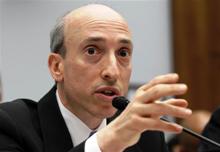 A deal between American and European regulators on derivatives has helped banks dodge a bullet. Before a compromise hatched on July 11, the Commodity Futures Trading Commission (CFTC) intended to force swaps involving United States’ counterparties to be cleared in America. That would have frozen cross-border flows and hammered volumes by creating separate regulatory jurisdictions.

Fortunately for global banks, that scenario has been averted. Banks will now have the choice of trading and clearing transatlantic swaps in either Europe or the United States. To satisfy the U.S. Dodd-Frank reforms, the regulatory framework on swaps will be judged as “essentially identical” in each jurisdiction – although they are nothing of the sort in reality.

The two regimes differ in that Europe’s swaps reforms are taking longer to implement than America’s, but are more stringent on most of the main issues. The European Securities and Markets Authority (ESMA) reckons it will take at least a year, possibly two, before they are in place. U.S. rules, meanwhile, are ready to come into force. Europeans are tougher on data transparency, margin posting and trade reporting. They also cover foreign-exchange swaps.

The CFTC’s guiding principle was to prevent another AIG-style blowup. The U.S. insurer embraced the light-touch regulation afforded to its London subsidiary to build a portfolio of credit-default swaps (CDS) that soured in 2008. But there is reason to suppose that Europe has upped its game. Swaps face greater scrutiny because of central counterparty clearing requirements. Greater rigour in mark-to-market provisions should also expose risk. And financial institutions have to post more collateral than before as protection for over-the-counter trades.

That’s not to say that regulatory arbitrage has vanished in swaps markets. The CFTC still has to guard against slippage in jurisdictions other than the EU. In the meantime it has chosen to delay rules forcing all foreign firms to comply with its cross-border rules.

Banks should also not get too carried away: the CFTC’s so-called “no-action letters” aren’t iron-clad rules. Legal wrangling over how much data foreign watchdogs should be allowed to access could yet damage the agreement. But swaps regulation is in a better place than it was. That, at least, is progress.

The U.S. Commodity Futures Trading Commission voted 3-1 on July 12 to delay the date when financial firms must begin complying with some of its new cross-border derivatives rules.
The vote came a day after the European Commission and U.S. regulators agreed to treat their respective jurisdiction’s rules on derivatives as equivalent.
The Commodity Futures Trading Commission issued four so-called “no-action” letters that would allow Eurex and LCH.Clearnet to clear trades by U.S. members and enable European and American market participants to treat requirements on swaps trading as “essentially identical” on both sides of the Atlantic.