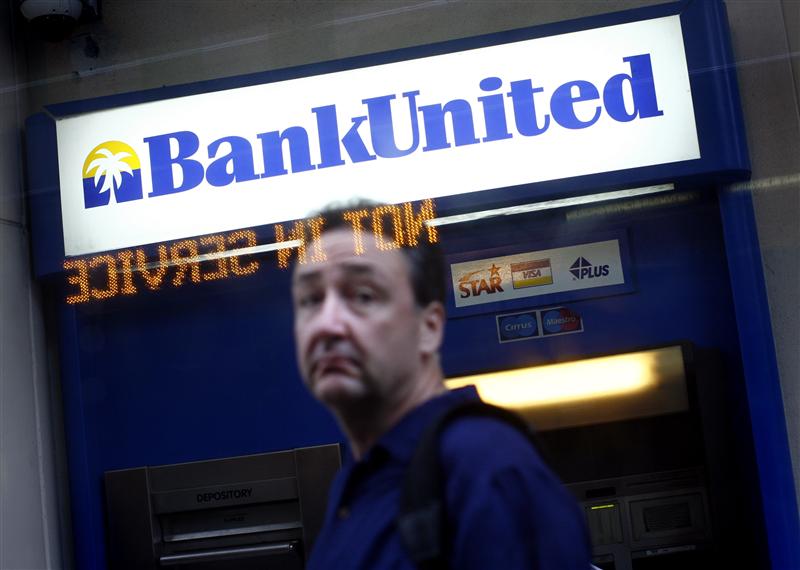 BankUnited’s stock market return represented a rare glimmer of hope in American banking a year ago. Here was a failed Florida lender rescued from the dustbin, impregnated with fresh capital and led by highly incentivized and experienced managers. They planned to forge an exemplary industry path, rolling up small banks, squeezing out efficiencies and creating more competition. Now they’re waving a white flag.

It’s easy to see BankUnited’s decision to hire Goldman Sachs to canvass buyers as confirmation that Chief Executive John Kanas and his private equity backers wanted a quick flip all along. With the bank worth some $2.5 billion, they’ve already made their $900 million back and then some.

But there’s an alternative narrative worth considering. The hopes of Kanas and his crew from Carlyle, Blackstone and WL Ross to quadruple BankUnited into a $40 billion-asset institution, with its attendant economies of scale, were vanquished by a confluence of crummy economics, potentially delusional industry rivals and zealous regulators.

In the new banking world, loan growth is highly correlated to GDP growth. With the latter sluggish, so must be the former. That should catalyze the country’s 7,000 dinky banks to seek efficiencies though consolidation. But even willing sellers – to the frustration of BankUnited, which looked at 50 of them – are holding out for pre-crisis valuations. They seem to believe good times will come again.

Regulators know it won’t happen and so should be prodding the strong to capture the weak to form more medium-sized lenders capable of taking on customer-numb giants like Bank of America. Instead, they’re struggling to comply with Dodd-Frank.

In BankUnited’s case, that meant coughing up detailed personal financial disclosures of investors, including Carlyle’s David Rubenstein and Blackstone’s Steven Schwarzman, even though they’re not on the board. That was a Federal Reserve precondition for BankUnited’s $70 million purchase and charter switch of a bank in New York, where Kanas wanted to fire up the competitive dynamics.

Instead, BankUnited seems destined to be swallowed up by a super-regional. Competition will be forestalled and Kanas and his coterie will cash out handsomely. If they’re giving up the game, others may soon follow.

A pedestrian walks in front of a BankUnited branch in downtown Miami, Florida May 22, 2009.

BankUnited, a Florida lender that failed and was recapitalized in a deal brokered by the Federal Deposit Insurance Corp, has hired Goldman Sachs to evaluate potential buyers, according to people familiar with the situation.

The bank, which has a $2.54 billion market capitalization, was acquired from the FDIC by a private equity consortium led by New York banker John Kanas in 2009. Last year, the bank went public in a deal that tripled their $900 million investment in BankUnited.