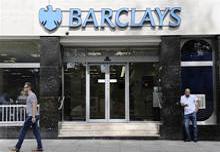 It’s not certain he will have to issue equity. Barclays’ recent strategy plan requires only that the bank attains a 10.5 percent core Tier 1 capital ratio under new “Basel III” rules by 2015. And the Bank of England recently stated UK banks only had to attain a lowly 7 percent by the end of 2013. Barclays is at 8.4 percent.

But that’s not the whole story. UK peers like Royal Bank of Scotland and Lloyds are also capital laggards, but these are both shrinking back to their domestic base. Investors may want a global investment bank like Barclays to at least attain parity with Deutsche’s 9.5 percent ratio.

The other problem is that regulators are capricious. Deutsche’s placing is partly because its own supervisor, BaFin, has become more concerned over group capital getting trapped if its U.S. counterpart requires European banks with New York investment banks to subsidiarise. Although Barclays has fewer group assets in the United States – just under a quarter against over a third for Deutsche, according to Morgan Stanley – it could still face a shortfall if the BoE decided to follow BaFin’s lead.

To complicate things further, Barclays doesn’t know for certain whether 4 billion pounds of recently raised contingent convertibles, which turn into equity if Barclays’ core Tier 1 capital ratio sinks below 7 percent, will count as a buffer.

How would Barclays plug a gap? At its current market capitalization, it could probably only get away with a 3.7 billion pound Deutsche-style private placement without breaching pre-emption rights: against 4.4 billion pounds that would be needed to get up to Deutsche’s 9.5 percent ratio. Qatar, which holds 6 percent of its shares, may baulk at supporting a rights issue when a Serious Fraud Office probe hangs over certain commercial arrangements between Barclays and itself around the time of its capital support in 2008.

None of these headaches are insuperable, especially as Barclays should be able to close some of the gap organically. But as Jain and Fitschen have now found, passing up the chance to raise capital during your honeymoon period can prove a credibility-sapping mistake.

A man walks past a branch of Barclays bank in central London, June 28 2012. REUTERS/Paul Hackett