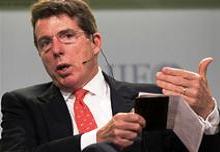 Barclays’ reputation has hit a new low. The UK bank on June 27 received a 290 million pound fine from UK and U.S. regulators for trying to rig the London Interbank Offered Rate (Libor). The UK element is the biggest fine the Financial Services Authority has ever handed out.

The popular post-crunch perception of universal banks is that ordinary retail customers suffer from the fast and loose antics of traders in the investment bank. Over the course of an extraordinary 44-page document, the FSA largely stacks up that stereotype in Barclays’ case.

To re-cap, Libor is the rate off which most retail and investment bank transactions, including $554 trillion of interest-rate derivatives, are priced. It is based on submissions by a host of lenders, and these are then crunched by Thomson Reuters. The FSA says Barclays, and potentially other banks, tried to manipulate the rate for the benefit of their trading desks.

The regulator has exposed a severe systems failure at Barclays Capital, the investment banking unit. Derivatives traders and those submitting Libor bids should have been divided by so-called Chinese walls. Instead, between 2005 and 2009, 14 traders submitted 257 requests to try to rig the rate in their favour. The FSA’s report shows they were brazen about it. One trader “begs” a submitter to put in a low Libor submission. The submitter responds: “I’ll see what I can do”. When hearing a submitter will be in late, another knowingly exclaims, “Who’s going to put my low fixings in?” And yet another pledges, “when I write a book about this business your name will be written in golden lights”. The submitter responds, “I would prefer this not (to) be in any book!”

Barclays Chief Executive Bob Diamond was in charge of Barclays Capital when these abuses took place. He was responsible for the culture. Unnamed senior executives are indirectly implicated by the FSA in the misleading Libor submissions. And no Chinese walls were put in until December 2009.

In Diamond’s favour, other banks are likely to be brought to book, and there is no evidence the attempted manipulation actually worked. He can blame wrongdoing on a small team at the bottom of his organisation.

But the fact that he and three top executives have pre-emptively waived their 2012 bonuses shows how seriously they are taking the ruling. There may still be further repercussions. And the affair weakens Diamond’s authority in arguing the firm’s case in the debate about future regulation. The full costs of the affair for Diamond and Barclays will be more than just financial.

Barclays announced on June 27 it would pay a 290 million pound fine in order to settle a probe surrounding the manipulation of the London Interbank Offered Rates (Libor).

The UK bank said it had reached an agreement with the Financial Services Authority, the U.S. Commodity Futures Trading Commission and the U.S. Department of Justice for the fine. Barclays was penalised for making submissions to the Libor setting process based on requests from its interest-rate derivatives traders. The FSA ruled it also sought to influence the Euribor submissions of other banks, and reduced its Libor submission during the financial crisis as a result of senior management’s concerns over negative media comment.

The FSA said that Barclays had failed to have adequate systems and controls in places regarding the Libor submission process until June 2010, and failed to deal with issues relating to the submissions when they were escalated to its investment bank compliance function in 2007-2008.

As a result, Chief Executive Bob Diamond and Chris Lucas, Jerry del Missier and Rich Ricci will all waive their bonus entitlement for 2012.

The FSA said it continued to pursue a number of other significant cross-border investigations in the same area.