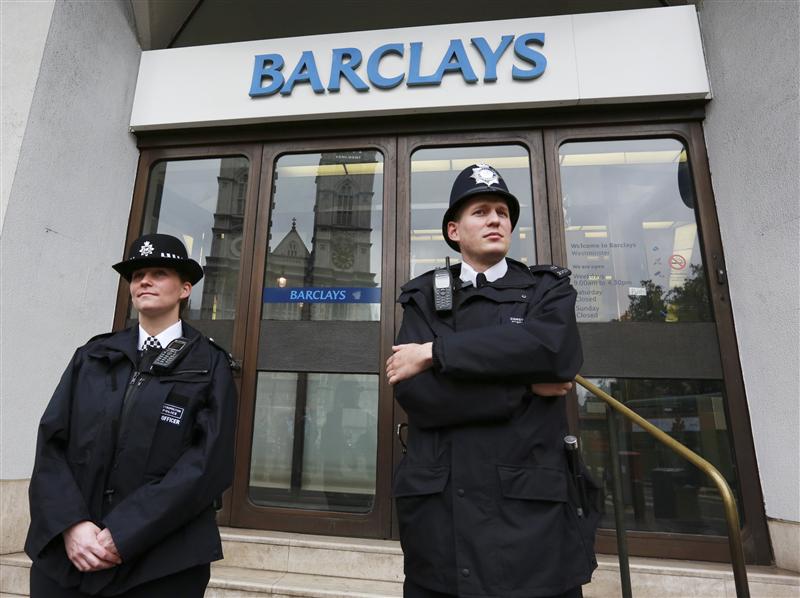 Gulf funds spared the UK bank a state bailout in 2008. But the capital always looked costly and an “advisory” relationship with Qatar slim value. If a regulatory probe into disclosure discredits what’s left of Barclays’ top team, the deal will look even more like a Faustian pact.

Police wait for protestors to appear at a branch of Barclays Bank in Westminster, London in July 2012. (REUTERS/Olivia Harris)

Barclays said on July 27 that it is at the centre of a probe by the UK Financial Services Authority over its disclosure in relation to “fees payable under certain commercial agreements and whether these may have related to the bank’s capital raisings in June and November 2008”.
The British bank, which said that it considers it has met its disclosure obligations, added that the investigation involves four current and former senior employees, including Chris Lucas, group finance director. Former Barclays executive Roger Jenkins is also under investigation, according to a person familiar with the matter.
The British bank said on June 25, 2008 that it had “entered into an agreement for the provision of advisory services by Qatar Investment Authority to Barclays in the Middle East and agreed to explore opportunities for a co-operative business relationship with SMBC [Japan’s Sumitomo Corporation]”.
The disclosure was made as part of the bank’s announcement that it had raised 4.5 billion pounds from investors including the Qatar Investment Authority (QIA) and Challenger, a vehicle beneficially owned by Qatar’s prime minister.
On Oct 31, 2008, Barclays announced plans to raise a further 7.3 billion pounds from investors led by Qatar Holding, Challenger, and Abu Dhabi’s Sheikh Mansour. The bank said the fees relating to the transaction amounted to 300 million pounds.
As part of the fees, Barclays said that Qatar Holding would be paid 66 million pounds “for having arranged certain of the subscriptions in the capital raising” without providing further detail.