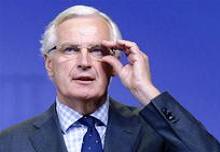 The European Union’s top financial regulator seems out of touch on banking reform. His peers want banks to keep more capital, but Michel Barnier says the United States should give European banks a break.

U.S. regulators are right in principle. In general, banks need more capital, to remove their implicit government subsidy and to avoid financial crises. And separately capitalised American subsidiaries of Foreign Banking Organisations (FBOs) will be both safer and easier to regulate. The net cost to American society, despite more potentially expensive corporate financing, would probably be somewhere between negligible and zero.

Barnier, the EU’s Internal Market Commissioner, may be thinking more like a trade representative than a regulator. After all, European banks have most to lose from the rules. Deutsche Bank, with 37 percent of group assets in its U.S. subsidiary, is most exposed to the draft FBO rules, according to research by Morgan Stanley.

Credit Suisse has a separately capitalised U.S. entity, but most other big European banks will have to scramble. It can be done. Deutsche’s chief financial officer Stefan Krause has contemplated raising contingent capital to meet future U.S. capital needs. Transferring group capital via a debt-for-equity swap is another option.

Barnier can argue that the proposed tough FBO rules – the consultation period runs until April 30 – would build too thick a margin of safety. Liquidity requirements would force foreign banks to expand unnecessarily their portfolios of low-risk assets. He can also point out that while the UK may yet push for something approaching the FBO prescription, U.S. banks operating in the euro zone are judged on their worldwide capital.

Such arguments depend on Barnier’s vision of national regulators as global team players. In such a happy world, the multinational team would calmly and quickly agree to apportion the pain when a globally systemic institution failed. But history suggests that’s naïve. Lehman Brothers’ collapse left U.S. authorities unable to access funds held in London. The more recent experience of Cyprus showed Europe struggling to deal with banks that posed no global risk.

Barnier may genuinely fear American protectionism, but he sounds like he is arguing for imprudence.

A U.S. plan to force foreign banks to hold far more capital could sow discord among supervisors and lead to retaliation from abroad, according to a letter sent by European Union financial services chief Michel Barnier to Federal Reserve Chairman Ben Bernanke on April 22.

Michel Barnier, the European Commissioner in charge of regulation, speaks at a news conference in Brussels October 2 2012. REUTERS/Eric Vidal

A U.S. plan to force foreign banks to hold far more capital could sow discord among supervisors and lead to retaliation from abroad, according to a letter sent by European Union financial services chief Michel Barnier to Federal Reserve Chairman Ben Bernanke on April 22.