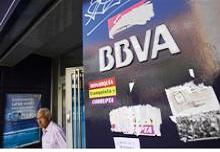 The Spanish bank ended 2015 on a decent note thanks to shrinking provisions, with net profit up in the fourth quarter. Bad loans should continue to fall. The catch: returns are still too low, capital looks light and GDP growth is slowing in Mexico and Spain.

or
Request a Free Trial
or
Babcock CEO’s reset comes with valuation upside
Sign in to your Breakingviews account
If you need assistance please email breakingviews.clientsupport@thomsonreuters.com

Spain’s second-largest bank said the fully loaded core Tier 1 capital ratio was 10.3 percent at the end of 2015, up 57 basis points in the three months to December.

A man walks out from a branch of Spain's second-largest bank BBVA in Madrid July 31 2012. REUTERS/Juan Medina

Spain’s second-largest bank said the fully loaded core Tier 1 capital ratio was 10.3 percent at the end of 2015, up 57 basis points in the three months to December.