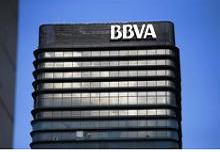 BBVA is the bank of choice for Spanish bulls. Sightings of that most Iberian of beasts are few and far between. But Spain’s second-largest lender looks best for anyone believing that the country’s economy is on the eve of a recovery.

Spain remains troubled. Real house prices are likely to fall further, and unemployment has hit an all-time high of 27 percent. Real GDP will shrink 1.6 percent this year, according to the International Monetary Fund. Yet the IMF also reckons the economy will grow 0.7 percent next year. Yields on Spain’s 10-year bonds have fallen from 7.2 percent to 4.3 percent since the beginning of August.

BBVA is currently dealing with the maelstrom better than its larger rival Santander. Both lenders’ net interest income – the difference between funding costs and asset earnings – suffered in the quarter, but unequally. BBVA managed to eke out minimal growth, while Santander’s fell 14 percent.

The smaller player’s 9 percent dip in its Spanish net interest income was almost half Santander’s 17 percent fall. BBVA is more sensitive to the domestic economy, with half its assets in Spain – compared to a third for Santander

The difference is also due partly to both lenders’ overseas operations. BBVA’s are in general performing better – for example in Mexico – than Santander’s activities in Brazil or the UK. Furthermore, BBVA is better capitalised under new Basel III rules, according to Nomura.

The bull case is that lower sovereign yields will eventually trickle through to bank borrowing costs. Non-performing loans from the Spanish real estate sector may not have peaked, but after several nudges last year from the regulator, both banks are heavily provisioned. If so, at 0.9 and 0.8 times their year-end book values, both BBVA and Santander look cheap.

Optimists still need nerves of steel. It will only take contraction of over 2.1 percent this year and 0.3 percent next for Spain’s economy to exceed the adverse macro scenario assumed in last year’s stress test. Some banks might then need more capital. Unemployment is still worsening, and bad debts to small businesses are ticking up. BBVA’s relative strength may yet reverse.