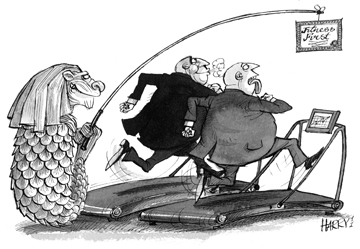 Just months ago Fitness First was set to IPO. Now distressed investors are taking control of the gym chain. Excess leverage and lean rivals left it out of shape. The restructuring will burn off most of private-equity owner BC Partners’ roughly 400-million-pound equity investment.

On April 24 Fitness First, which operates gyms in Australia, Britain, Germany and Asia, said it had agreed a three-month debt waiver with key creditors that will give it to time to complete a debt restructuring. Oaktree and Marathon, the distressed-debt investors that are Fitness First’s biggest lenders, were “finalising the injection of additional funds”, it added.
In March Reuters Loan Pricing Corp reported Oaktree and Marathon were set to become Fitness First’s biggest shareholders through a debt-for-equity swap. The duo, who hold more than 75 percent of the company’s debt, are likely to convert all their existing debt into equity and underwrite new debt of up to 100 million pounds.
Fitness First’s current owner, private-equity firm BC Partners, bought the group in 2005 from Cinven, another buyout house, for 835 million pounds.