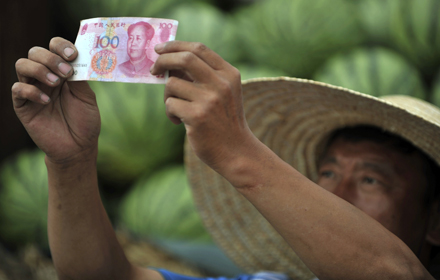 Beijing is damned if it does, and damned if it doesn’t. Further appreciation of the yuan increases the chances of an economic hard landing, as the Chinese currency isn’t undervalued anymore. But U.S. politicians have another idea.

If the trade balance reflects a currency’s value, then the yuan’s is pretty close to fair. China’s trade surplus was less than 2 percent of GDP in the first half of 2011, the lowest level since 2003. The trade position reflects the high rate of domestic inflation, which has the same economic effect as a rise in the exchange rate. The Bank for International Settlements calculates that the yuan’s real value, on a trade-weighted basis adjusted for relative consumer prices, has risen by 5.3 percent in 2011.

Another sign of equilibrium is the shrinking foreign exchange pile. Reserves declined from September to November, according to a government economist. In October, the central bank’s purchase of foreign currencies fell for the first time in almost eight years.

For many years, foreigners tried to buy yuan and yuan-denominated assets because they saw the currency as a one-way bet. But now they have another idea. The offshore yuan forward market shows foreign investors expect a 0.4 percent depreciation in the next year. The Chinese currency is cheaper in Hong Kong than inside China. And the small B share market, which is used mainly by foreign investors, fell 14 percent in November, while the main stock market dropped by 8 percent.

Politicians in Washington refuse to recognise the changing economics. President Barack Obama warned the U.S. public is growing frustrated with the pace of yuan appreciation. Republican presidential hopeful Mitt Romney said he would complain about China’s exchange-rate policy to the World Trade Organisation.

If Beijing allows the currency to overshoot, the eventual reversal will just be more painful. And if the Chinese have to choose between pleasing Washington and ensuring domestic stability, they’ll go for the latter. Premier Wen Jiabao has already spoken about more flexibility “in either direction”. Beijing may not be ready for a sharp yuan devaluation yet, but there is little room for further appreciation in 2012.

Still in demand: A watermelon vendor looks at a yuan banknote at a market in Shenyang.

China’s economy continued to slow in December, according to the HSBC manufacturing PMI, a monthly survey. December’s reading was 48.7, where anything below 50 implies a slowdown. November’s reading was 47.7.
Former U.S. Treasury Secretary Hank Paulson warned in Beijing in early December that a slower pace of yuan appreciation could produce political problems for China in the United States, especially during an election year, according to the Wall Street Journal.