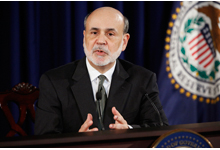 Ben Bernanke made a bold claim on his trip to Asia. In a speech delivered in Tokyo, the U.S. Federal Reserve chief said money printing by advanced nations is not the “dominant” force behind surging capital flows to emerging economies, and that these countries are net beneficiaries of stronger demand from the West. If he’s right, Asian central bankers who grumble about the Fed’s quantitative easing should send Bernanke something nice this Thanksgiving.

Policymakers from Manila to Moscow understand why advanced nations, having already cut interest rates to near zero, are compelled to print money. But that doesn’t mean they like the capital flows heading their way. Raising interest rates to cool speculation and tame inflation only makes matters worse, because higher yields attract more short-term foreign cash.

However, Bernanke suggested emerging market authorities are suffering from an optical illusion. He said the connection between monetary policy in advanced economies and global capital flows “is looser than is sometimes asserted”. Shifts in investor sentiment over the last few years, often in response to the European crisis, may have had a big influence in determining movements of capital.

Investor attitudes are undoubtedly important. However, an International Monetary Fund study cited by Bernanke actually undermines his case: it shows that a one percentage point increase in real U.S. interest rates would reduce the probability of an emerging market surge by three percentage points. Bernanke’s advice to emerging market governments is to allow their currencies to appreciate. But it’s hard to see export-dependent nations – particularly Asian ones – agreeing to such a painful adjustment amidst weak global demand.

The Fed chairman is on stronger ground when he argues that the net impact on emerging economies of money printing in advanced nations may be positive. A deep U.S. depression would mean global pain.

But this argument cannot be refuted because it’s impossible to say what state the world would be in without quantitative easing. While U.S. GDP might be lower, so might oil prices, which are of deep concern to many emerging market policy makers. In his Tokyo address, Bernanke didn’t even acknowledge the possibility that money printing may have pushed up the price of oil. It’s hard to see this speech doing much to win over Bernanke’s sceptical audience.