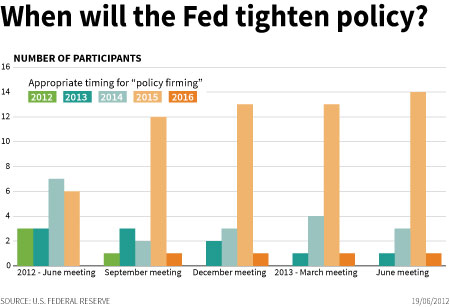 Obama says the chairman has done enough. If so, his successor will face the task of rolling back years of ultra-easy policies. Jittery markets make that tricky even for a known Fed boss. After Wednesday, Bernanke may have only five FOMC meetings left to help set a new direction.

U.S. central bankers give their own views on the year in which monetary policy should tighten. REUTERS/Stephen Culp

Federal Reserve Chairman Ben Bernanke said on June 19 the U.S. central bank expects to slow the pace of its bond purchases later this year and bring them to a halt around mid-2014, comments that weighed on stocks and pushed bond yields to a 15-month high. Bernanke made the statement at a news conference after the Fed’s decision, announced earlier in the day, to continue buying $85 billion in bonds per month given still-high unemployment.
Kansas City Fed President Esther George again dissented against the central bank’s expansion of its support for the economy and was joined by St. Louis Fed President James Bullard, who believed the Fed should signal more strongly its willingness to defend its 2 percent goal for inflation.
The Fed’s rate-setting committee has additional meetings scheduled in July, September, October and December this year, while next year’s gatherings kick off in January.
In a TV interview broadcast on June 17, President Barack Obama said Chairman Ben Bernanke had stayed at the Fed “a lot longer than he wanted or he was supposed to.” Bernanke became chairman on Feb. 1, 2006, and his second term ends on Jan. 31, 2014.
Media reports say Obama is considering a number of monetary experts for the job, including Fed Vice Chair Janet Yellen, former Treasury Secretary Lawrence Summers, former Treasury Secretary Timothy Geithner and former Fed Vice Chairman Roger Ferguson.
An announcement could come as early as this fall, to give the Fed nominee time to get through Senate confirmation by the time Bernanke’s term ends.
This item has been updated to reflect Bernanke’s remarks at a news conference after the FOMC meeting.