The BESt and worst 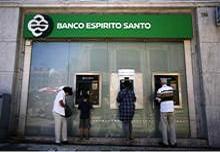 The troubled Portuguese lender’s three parent entities have all now sought creditor protection. That should clarify the bank’s losses and ownership, leaving Angola as BES’s key uncertainty. There is a way to sort this out too – but it isn’t pretty.

Espirito Santo Financial Group, which owns a 20 percent stake in Banco Espirito Santo, said on July 24 it had sought controlled management under Luxembourg law, a move that will prevent creditors from enforcing their rights.

The procedure is available for a company that is “momentarily in difficulties and unable to face its obligations, to be restructured and where such a procedure would facilitate an orderly realisation of the assets in the best interests of all creditors,” the ESFG statement said.

Banco Espirito Santo’s Angolan unit BES Angola will require a capital increase, the governor of the central bank of Angola, Jose de Lima Massano said on July 17. Massano told parliament that there were problems with BES Angola’s credit portfolio, including loans he described as “bad” and “in an irregular state.”