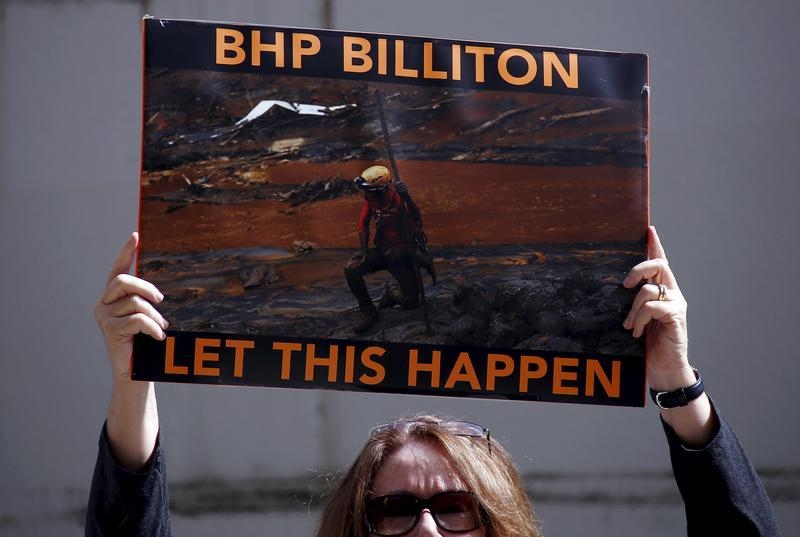 The mining giant is nixing CEO Andrew Mackenzie’s bonus after last year’s fatal Samarco dam collapse, days after its lawyers sidestepped blaming management. Withholding compensation is easier and may also be a faster way to persuade executives to pay attention to safety risks.

A protester holds a placard outside the venue for the annual general meeting for mining company BHP Billiton in Perth, Western Australia, November 19, 2015. REUTERS/David Gray - RTS7VRX

BHP Billiton's board withheld Chief Executive Andrew Mackenzie's bonus in part due to the November 2015 dam collapse at its iron-ore joint venture with Brazil's Vale which killed 17 people, Bloomberg reported on Aug. 30. Mackenzie, whose annual salary is $1.7 million, could have earned a bonus of up to $4 million. He received just 85 percent of his short-term incentive plan in the previous financial year.

An Aug. 29 report by the New York firm Cleary Gottlieb commissioned by Vale, BHP and Samarco pinpointed drainage and design flaws, not decision making, as the cause of the dam's collapse, which was Brazil's worst mining disaster. Brazilian prosecutors are expected to ask for criminal charges against employees in September.

BHP Billiton on Aug. 16 reported a record $6.4 bln loss for the year through June due to writedowns from the mining disaster and slumping commodity prices. The Melbourne-based miner has been lowering costs and debt.