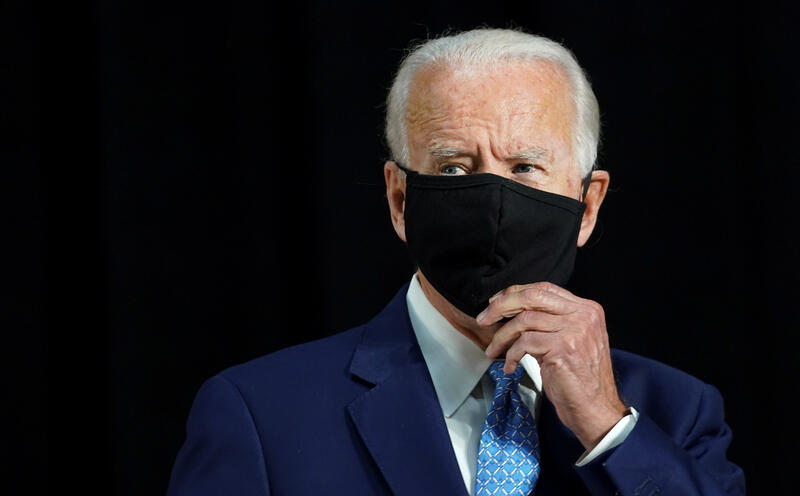 Proposals from a task force working for the U.S. presidential hopeful would leave high finance worse off, from splitting up banks and raising taxes to giving Americans accounts at the Fed. They’re just ideas, but the broad outlines of a Democratic presidency are becoming clearer.

Democratic U.S. presidential candidate and former Vice President Joe Biden puts his protective face mask back on and adjusts it as he departs after speaking about President Donald Trump's response to the coronavirus disease (COVID-19) pandemic and answering questions from reporters during a campaign event in Wilmington, Delaware, U.S., June 30, 2020.

U.S. presidential hopeful Joe Biden’s campaign unveiled a broad plan for revamping the U.S. economy drawn up by a so-called unity task force, with recommendations ranging from splitting up big banks to raising the minimum wage to $15 an hour.

The task force comprises advisers to Biden and Senator Bernie Sanders, who formerly ran for the Democratic Party nomination but subsequently pledged his support for the former U.S. vice president.

Financial proposals include offering all Americans a bank account held directly with the Federal Reserve and changing the central bank’s mandate to include the pursuit of racial equity. Banks would also be regulated to separate retail banking from “more risky investment operations.”

The task force also recommends a government-run health-insurance option for all Americans, but stops short of calling for universal free healthcare. It also advocates pushing for a net-zero-emission economy through measures like installing 500 million solar panels, but does not mention a ban on fracking.

Democrats are scheduled to meet on Aug. 17 to decide which candidate will represent the party in November’s election.