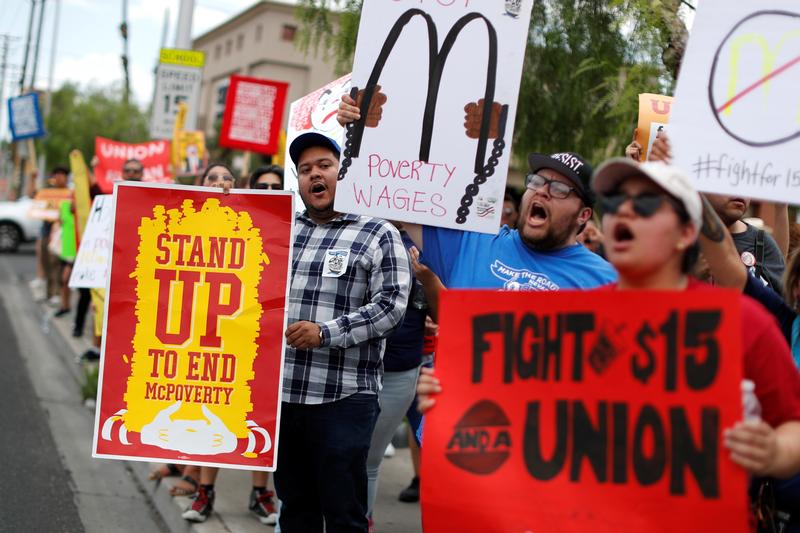 Joe Biden’s pitch for a federal minimum wage increase is worth a small jobs tradeoff. Critics of his $1.9 trillion stimulus plan got a boost from a congressional study that said the U.S. president’s plan to more than double the pay floor to $15 an hour could cost 1.4 million jobs by 2025. But it might also lift 900,000 Americans out of poverty.

It’s a complex issue. Mandating higher rates for the lowest-paid employees may force some organizations to have fewer people on the payroll. Meanwhile, those that are employed will be better able to support themselves and their families. They may spend more, too, fueling economic growth – but as the nonpartisan Congressional Budget Office also noted on Monday, the government may have to shell out additional unemployment benefits.

Other research has shown real-world wage hikes don’t always lead to job cuts. More than half of the 50 U.S. states have already set base pay higher than the current federal minimum. In those areas, McDonald’s restaurants passed on nearly all of the expense increase to consumers through higher-priced Big Macs and such and there was little impact on employment, according to a Princeton University study.

While big employers like Amazon.com, which has had a $15 minimum wage since 2018, have the scale to absorb costs, small businesses have less bandwidth. That’s especially true in the pandemic. States that have hiked minimum pay have sometimes given extra time for these enterprises to adjust, or allowed exemptions.

Minimum federal pay is in any case way overdue for an update. It has been stuck at its current rate of $7.25 an hour since 2009, giving someone working full time an annual salary of around $15,000. That’s barely more than the $13,000 poverty threshold for a single person to receive government benefits.

Covid-19 has also reversed some of the employment and pay gains that by the end of 2019 were finally reaching the minority groups that are typically last to benefit. The U.S. poverty rate jumped by 2.5 percentage points from June to December last year to 11.8% of the population, according to researchers at the Universities of Chicago and Notre Dame. Biden’s plan may struggle in the Senate given the slim Democratic margin. But the tradeoffs merit a hearing.

Raising the U.S. federal minimum wage to $15 an hour by 2025 would cost 1.4 million by that year, according to a Feb. 8 report by the Congressional Budget Office. The CBO also said the move would lift 900,000 Americans out of poverty by 2025. The plan is one component of President Joe Biden's $1.9 trillion economic relief package.

Raising the U.S. federal minimum wage to $15 an hour by 2025 would cost 1.4 million by that year, according to a Feb. 8 report by the Congressional Budget Office. The CBO also said the move would lift 900,000 Americans out of poverty by 2025. The plan is one component of President Joe Biden's $1.9 trillion economic relief package.