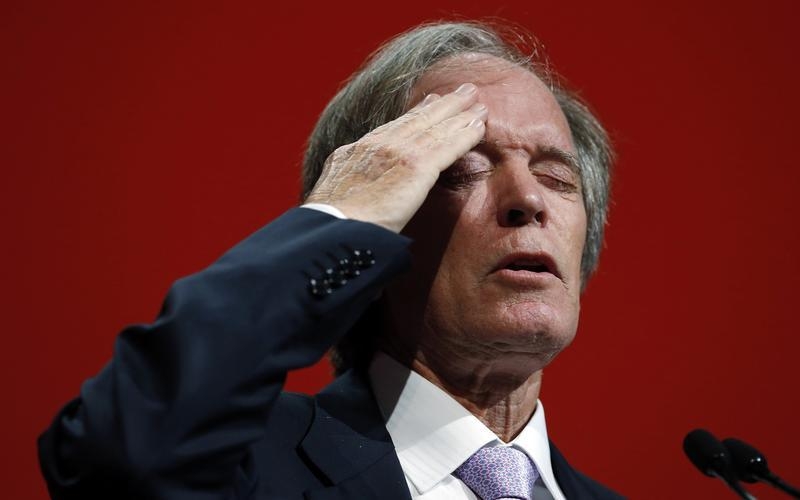 The old saw about past performance not necessarily being indicative of future results just found a new poster child: bond king Bill Gross sitting on his Janus Capital throne.

The billionaire Pimco founder shocked the investment world on Friday with a move to the Denver fund manager named for the god of new beginnings. Janus hired Gross to help power its push into fixed income. The firm’s market capitalization catapulted by a third, effectively valuing Gross and his services at as much as $800 million. Pimco’s parent company Allianz simultaneously lost over $4 billion in value.

Janus and Gross are in many respects made for each other. Janus was once a favored steward of individual investor assets, when it filled its boots with hot tech stocks during the fin de siècle boom. Back then, Janus was a $52 stock. When the boom ended, so did the firm’s winning streak. Before Gross jumped from Pimco ahead of being pushed, Janus shares were trading at about $11 apiece.

Gross’s best days also are arguably behind him. The three-decade boom in fixed-income securities lifted all boats, but none more so than those of the Newport Beach, California-based investor. Assets under management at Pimco swelled to nearly $2 trillion, with the flagship Total Return Fund led by Gross benefiting mightily.

Over the past year, however, Gross had an ugly, public break with Mohamed El-Erian, who had been widely seen as his successor. In August, the Gross-led fund suffered its 16th straight month of capital flight, falling to $222 billion from a peak of $293 billion in April 2013. And the Securities and Exchange Commission this week was reported by the Wall Street Journal to be investigating whether an ETF that Gross runs to mimic his fund had inflated its performance.

Since their glory days, both Janus and Gross have publicly chafed under their overseers. Janus, unhappy with the valuation ascribed to it by public stockholders, contemplated a management buyout. While Allianz has happily cashed Pimco’s dividend checks, the arrangement has not been a smooth one, as Gross’s departure attests.

Like its Roman namesake, Janus now has two faces: one of an ageing bond investor and the other a former stock-market darling. There’s an important distinction, though. The god had one visage looking forward and the other backwards. This one has two facing the same direction.

Dubbed the “Bond King” and long-time manager of the Pimco Total Return Fund, the world’s largest bond fund, Gross will manage the Janus Global Unconstrained Bond Fund, Janus said in a statement. He begins work at Janus on Sept. 29.

“Bill Gross has an exemplary track record with decades of success and he will offer an exceptional approach to navigating today’s increasingly risky markets with a focus on macro, unconstrained strategies. His involvement provides Janus a unique opportunity to offer strategies and products that are highly complementary to those already managed by our credit-based fixed income team,” said Richard Weil, Janus CEO.

“I look forward to returning my full focus to the fixed income markets and investing, giving up many of the complexities that go with managing a large, complicated organization,” Gross said.