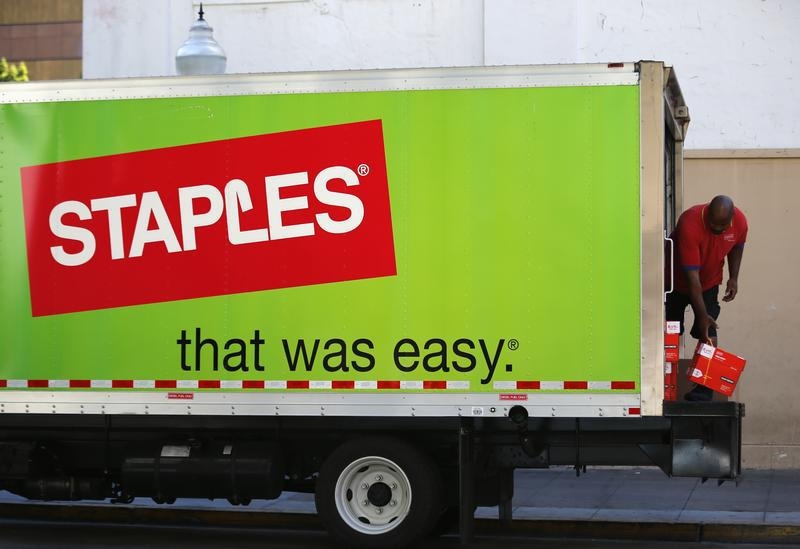 A potential $13 billion merger of Staples and Office Depot looks great – on paper, at least. Activist investor Starboard has taken big stakes in each of America’s two remaining large office supply chains and, according to CNBC, wants to bind the two together.

The financial case is compelling. Analysts at Credit Suisse outlined this in September: the two could cut at least $1.4 billion of annual costs by closing stores, squeezing suppliers and spending less on overheads and marketing.

That’s barely 4 percent of the firms’ estimated combined sales this year, but because margins are low and the stocks are beaten down, it would make a huge difference. On a net present value basis it could be worth almost $9 billion, a Breakingviews back-of-the-notepad calculation shows.

That gives the $9.5 billion Staples a lot of firepower to snap up its $3.6 billion rival. It could manage an all-cash deal at a hefty 80 percent premium to Office Depot’s undisturbed share price of $5.12. EBITDA would jump by 69 percent.

Moreover, in approving Office Depot’s purchase of Office Max last year, the Federal Trade Commission apparently blessed retail mergers of all kinds. In the age of Amazon and Wal-Mart, uniting big players in a niche like pet food, vitamins, or indeed stationery, no longer confers dangerous market power. Or so the argument goes.

In fact the FTC, which stopped a Staples-Office Depot deal in 1997, might be tougher than expected. Permitting the second- and third-placed firms to merge is easier than allowing the top two to tango. Analysts at Janney highlight the firm’s contract business: a deal could lift prices for government customers.

There’s also a question of prudence. It’s not clear how Staples would pay. A cash deal might be easiest because it would limit near-term earnings dilution. That would take debt to 2.6 times EBITDA, Credit Suisse says.

In most industries that’s fine. But U.S. retail is a bloodbath: analysts’ estimates for 2016 EBITDA at Staples have sunk 25 percent in a year, Datastream shows. If competition keeps intensifying, having a weak balance sheet is a risk that may not be worth running.

Starboard disclosed a 5.1 percent stake in Staples, the biggest stationery chain, and boosted its holdings in Office Depot to nearly 10 percent, according to regulatory documents filed on Dec. 11.

Starboard disclosed a 5.1 percent stake in Staples, the biggest stationery chain, and boosted its holdings in Office Depot to nearly 10 percent, according to regulatory documents filed on Dec. 11.