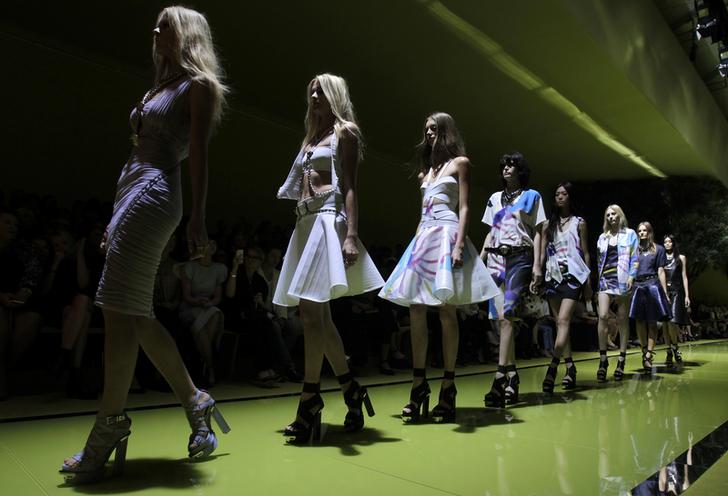 Blackstone is betting Versace can go up a few sizes. The U.S. private equity firm has bought 20 percent of the Italian fashion house at a 1 billion-euro valuation. This is a wager that Versace’s lightweight business can grow to fit its extra-large brand.

In the 1990s Versace was pre-eminent in Italian fashion, alongside Giorgio Armani. It lost its way after the murder of founder Gianni Versace in 1997, and only recently began to revive under Gian Giacomo Ferraris, the former Jil Sander CEO.

Sales in 2013 are likely to be 480 million euros ($658 million). That is less in nominal dollar terms than the roughly $800 million it made under Gianni. EBITDA margins are a skimpy 15 percent. In financial terms, that makes Versace an “XS” versus, say, Prada, with its 3.6 billion euros of revenue and near-32 percent EBITDA margins.

But there is still an “XXL” brand lurking in Versace’s wardrobe. The name endured, even in the lean years. A 2008 survey by AC Nielsen found that 19 percent of global consumers would still buy Versace first, if money were no object. Vogue dubs it “a universal symbol of all that is glamorous and decadent.” History and identity matter when you want customers to pay top dollar.

So there is room to grow, especially in Asia and the United States. Versace owns just 137 stores and targets 200 within three years. Gucci, for comparison, has 474. Versace could also be far more active online.

The Blackstone investment, after a hot auction, reflects a private-equity industry flush with funds and short of classic buyouts. Here Blackstone is acting more like a “growth equity” investor, taking a minority stake and one board seat, using new capital to fund growth, and eschewing debt.

That’s not without risk. It’s all smiles now – Blackstone boss Steve Schwarzman personally charmed Donatella Versace into a deal. And Blackstone presumably obtained safeguards on management continuity and its ability to exit. But the two sides could grow apart – and things could get messy. Unorthodox PE deals could yet prove more fad than fashion.

Blackstone agreed to buy a 20 percent stake in Versace, in a deal that values the family-owned Italian fashion house at about 1 billion euros ($1.37 billion). In a statement on Feb. 27, Blackstone said it would buy 60 million euros of stock from GIVI Holding, the vehicle through which Allegra, Donatella, and Santo Versace own the company, and inject 150 million euros more in fresh capital.

Versace Chief Executive Gian Giacomo Ferraris, who has lead a turnaround at the group, told Reuters the company wanted to maintain its independence, and still planned a stock-market flotation in three to five years. He said Versace aimed to grow from 137 directly-owned stores to 200 within three years.

Full-year results for Versace are due at the end of March. The company said it expects revenue of nearly 480 million euros, up roughly 18 percent, and EBITDA of “at least” 69 million euros, an increase of more than 50 percent on 2012.