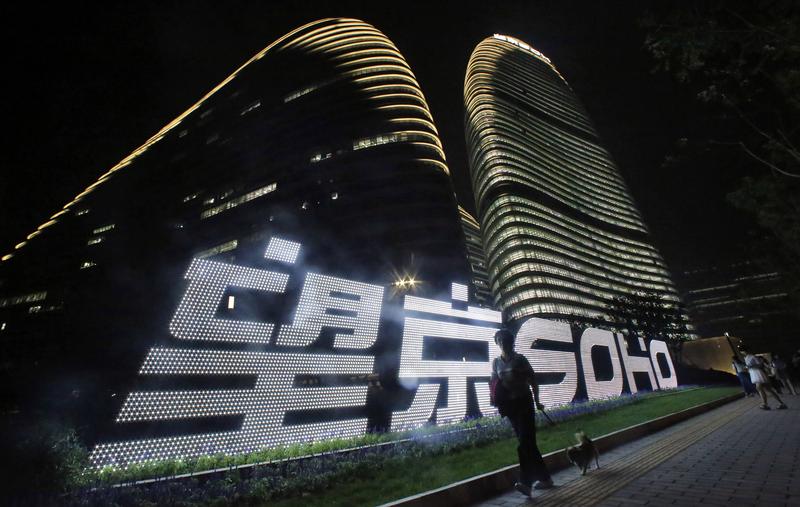 Blackstone has spotted a prime vacancy in China’s property market. The private equity firm is in talks to buy Soho China for $6.3 billion, including debt. A 101% premium is eye-catching, but the collection of skyscrapers looks cheap. After Blackstone’s lucrative run selling to mainland buyers, this possible deal warrants attention.

Soho China became one of the country’s best-known developers for several reasons. One is the power couple that controls it. Pan Shiyi and Zhang Xin own 64% and would keep a stake in a sale to Blackstone, according to Reuters, which first reported the negotiations. Enlisting renowned Iraqi architect Zaha Hadid, before she died in 2016, to help design some of the flashy buildings in Beijing and Shanghai also helped raise the 25-year-old company’s profile.

It has lost some of its shine, though. Office rents have been falling and vacancies rising over the past year, in part because of a flood of new developments in China’s two financial hubs. Soho China’s stock price has slumped by more than a third over the past two years. It was trading at just 40% of book value, well below many Hong Kong-listed property peers, before news of a potential deal broke.

Blackstone clearly smells opportunity. At HK$6 a share, it would be paying double the undisturbed share price despite the coronavirus epidemic that is weighing on an economy already wrestling to sustain its pace of growth. It also suggests that the firm led by Steve Schwarzman is not convinced by the brewing idea that the outbreak will spawn a new remote-working culture.

A chunky Blackstone acquisition in China would be notable for another important reason. Its market timing often proves uncanny. It went public, selling a stake to sovereign fund China Investment Corp in the process, in June 2007, just ahead of the global financial crisis. Its shares collapsed over the ensuing 18 months. Blackstone also has generated healthy returns in recent years by offloading big assets to mainland conglomerates Anbang and HNA, both of which have subsequently fallen on hard times.

Buying Soho China would not necessarily represent the broad call of a bottom. Its office towers are rare gems in prime locations. And yet when one of the world’s savviest real estate investors is ready to act during tough times, it is worth watching closely.

Blackstone offered HK$6 per share, a 101% premium to the closing price on March 9, valuing the company’s equity at $4 billion.

Soho China Chairman Pan Shiyi and his wife, Zhang Xin, who is chief executive, own a combined 63.9% of the company and plan to retain a small stake after any deal with Blackstone, according to Reuters.

A woman walks her dog past a logo in front of Wangjing SOHO, on the opening day of the compound, in Beijing, September 20, 2014. Wangjing SOHO, the latest commercial real estate project completed by SOHO China, is designed by Pritzker Prize winner Iraqi-British architect Zaha Hadid. The compound is comprised of three towers, the tallest of which reaches 200 metres. REUTERS/Barry Huang (CHINA - Tags: REAL ESTATE BUSINESS LOGO)

Blackstone offered HK$6 per share, a 101% premium to the closing price on March 9, valuing the company’s equity at $4 billion.

Soho China Chairman Pan Shiyi and his wife, Zhang Xin, who is chief executive, own a combined 63.9% of the company and plan to retain a small stake after any deal with Blackstone, according to Reuters.