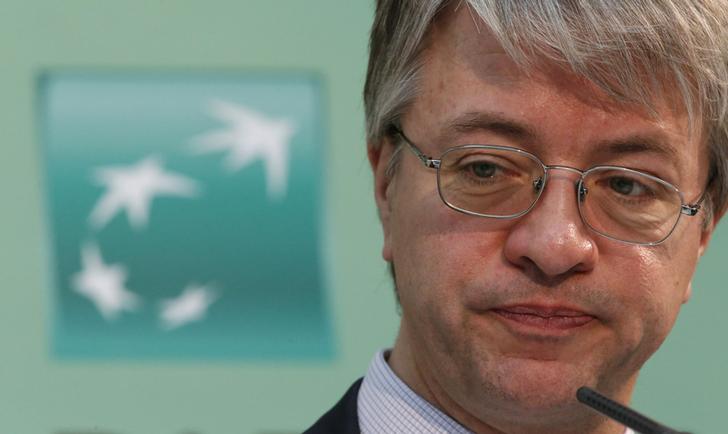 France’s largest bank’s 30 pct discount to tangible book value implies investor fears about its so-so capital and exposure to stricken oil groups. BNP Paribas’ top line in its three main arms still grew in the final quarter. It should be trading nearer the likes of ING.

BNP Paribas on Feb. 5 reported a fall of more than half in fourth-quarter net profit to 665 million euros, slightly missing analyst expectations.

A 2.9 percent rise in revenue for the three months to December versus the same period in 2014 was more than offset by a 7.6 percent increase in costs. BNP Paribas said it was raising its cost-savings target by 300 million euros to offset additional compliance expenses this year.

The average forecast fourth-quarter net profit for 12 analysts polled by Thomson Reuters came to 845 million euros. There were, however, several one-off costs and revenue rose in all of the French bank’s main divisions.

BNP Paribas said that 2.5 percent of its gross commitments – or 25.6 billion euros of exposures net of guarantees and provisions - were to the oil and gas sector, with 1 percent to metals and mining. Of its oil and gas exposure, it said that 60 percent of its net exposure was to oil majors or national oil companies and 75 percent was rated investment grade.

The French bank also unveiled a restructuring plan for its corporate and investment banking division for the next four years. By the end of 2019, BNP Paribas wants to cut more than 1 billion euros in costs – or by 12 percent - while raising revenue by 4 percent or more each year. The result is a targeted 48 percent increase in pre-tax income.