Changing of the minds 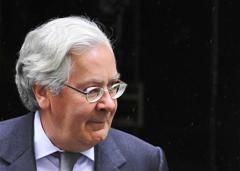 Reality is catching up with Mervyn King once again. After months of resistance, the governor of the Bank of England has announced plans to channel subsidised loans to British borrowers and pump extra liquidity into banks. The overt justification for the U-turn is to pre-empt a storm from Europe. But King can’t lay all the blame on the euro zone: many of Britain’s woes are self-inflicted.

The central bank has slashed interest rates and pumped 325 billion pounds into the economy through quantitative easing. Yet bank funding costs remain high and credit tight. This is particularly painful for consumers and small businesses, which have few alternatives to bank finance.

So the BoE is to offer banks up to 80 billion pounds in multi-year loans at below-market rates, secured against loans to the British economy. Not for the first time, the government will indemnify the central bank against subsequent losses. The BoE will also conduct monthly auctions of six-month liquidity to ease funding strains.

Without the hard details, it’s hard to say whether the “funding-for-lending” initiative will work. But it will test the view of many bank executives that falling lending reflects a shortage of demand, not a lack of supply. Extra liquidity is of course welcome, even though the size and duration of the BoE’s programme falls well short of the European Central Bank’s operations.

King is wrong to blame problems entirely on the euro zone. Though turmoil on the continent has undermined economic confidence and rattled markets, government austerity and the UK’s still-large private debt burden are an added drag. Regulation hasn’t helped either: King’s plan for taxpayer-subsidised loans coincided with the government publishing new rules designed to limit future bailouts. Though the reforms make long-term sense, they will hardly make bank credit cheaper.

The UK authorities are recognising that loose monetary policy won’t work if the banking system isn’t functioning properly. And the emphasis of policymaking is rightly moving beyond financial stability: the BoE’s new Financial Policy Committee, originally set up to prevent future asset bubbles, will be given an explicit mandate to promote economic growth. But it’s disingenuous to suggest the euro zone forced the change of direction.

The UK government and Bank of England said on June 14 they are preparing a scheme to channel cheap loans to British businesses as part of a range of measures designed to defend the country’s financial system from market turmoil.
Mervyn King, governor of the Bank of England, said the BoE and UK Treasury were working on a “funding for lending” scheme that would provide multi-year loans at below-market rates “linked to the performance of banks in sustaining or expanding their lending to the UK non-financial sector during the present period of heightened uncertainty.”
The BoE would lend to banks, secured on collateral such as small business loans. The government would indemnify the central bank against any losses on its loans. Treasury officials said the government plan could support an estimated 80 billion pounds in new loans.
Separately, King also announced plans to auction sterling liquidity under the BoE’s Extended Collateral Term Repo Facility. This will give banks access to longer-term funding against a wider range of collateral than the central bank normally offers. Each month, the BoE will auction at least 5 billion pounds of six-month liquidity, with a minimum bid rate of 25 basis points.