BAC to the wall 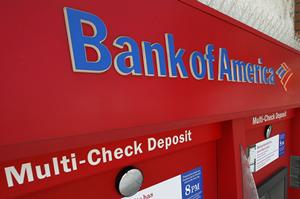 Bank of America is stuck in a low-profitability trap. Several businesses at the Charlotte, North Carolina-based bank actually put in a good showing for the second quarter. The trouble is, BofA as a whole is still struggling to churn out solid earnings – even after aggressive cost-cutting.

The $2 billion earnings figure reported by the bank on Wednesday is, on the face of it, abysmal. It equates to an annualized return on equity of just 3.68 percent – and was only that high because of a mere 18 percent tax rate.

The quarter was noisy, though, mostly because BofA had to set aside $4 billion for potential legal costs. That and the $6 billion socked away in the first three months of the year may not stay in the vault long: The bank is poised to follow several rivals in settling with the U.S. Department of Justice over pre-crisis mortgage shenanigans. The tab is expected to be anywhere between $13 billion and $17 billion, according to the Wall Street Journal.

It’s better than the headline figure but boosts the bank’s return on equity to only 6.4 percent. That is still way below the 10 percent generally regarded as the hurdle for big banks to beat their cost of capital.

The news was not all gloomy. Fixed income trading, for example, rose 5 percent from last year’s second quarter, making BofA the only firm to show improvement in that area. Wealth management clocked its sixth quarter in a row of a pre-tax margin above 25 percent. And consumer and wholesale banking did well, too.

The issue is costs. Even without the legal reserves, BofA’s efficiency ratio is 66 percent. That’s a marked improvement over the past couple of years, thanks to a drive to cut $2 billion of expenses from the bank each quarter. But it’s way behind the likes of JPMorgan and Wells Fargo, where the ratio is under 60 percent.

Reaching a 10 percent RoE requires BofA to find $2 billion more in earnings a quarter from revenue gains, cost cuts or both. That’s a tough target to hit.

The bank’s results included a $4 billion charge to cover litigation over mortgages and other legal costs.

Separately, the bank offered $13 billion to settle with the U.S. Department of Justice over mortgage issues, the Wall Street Journal reported on July 16. The DOJ, though, wants billions more.

The bank’s results included a $4 billion charge to cover litigation over mortgages and other legal costs.

Separately, the bank offered $13 billion to settle with the U.S. Department of Justice over mortgage issues, the Wall Street Journal reported on July 16. The DOJ, though, wants billions more.