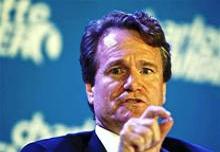 A $16.5 billion settlement with the U.S. government would resolve most of the bank’s mortgage woes. But CEO Brian Moynihan needs to find up to $10 billion extra a year to create a respectable bottom line. That will require costs cuts, tax breaks and higher interest rates.

Bank of America is close to settling with the U.S. Department of Justice and several state regulators to end investigations into mortgage securities the bank sold before the financial crisis, the Wall Street Journal reported on Aug. 6. The bank would pay around $9 billion in cash and distribute the rest in the form of assistance to struggling homeowners.

BofA announced on Aug. 6 that it had received approval from the Federal Reserve to increase its dividend from 1 cent a share to 5 cents a share. The regulator forced the bank to suspend boosting the payout after BofA said it had found a problem with how it calculated its capital for the annual stress test that revealed a $4 billion discrepancy.