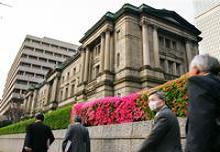 Expectations are running high for Japan’s next monetary czar. Haruhiko Kuroda, who has been nominated by the government as the Bank of Japan’s next governor, needs to quickly demonstrate his deflation-fighting credentials. One way would be to do away with the BOJ’s self-imposed limit on how many government bonds it can hold.

There is no theoretical justification for the rule, which says that the BOJ’s holding of government bonds cannot exceed the banknotes it issues. The so-called “banknote rule” was concocted by the BOJ to convince investors that the purpose of its “rinban” operations, under which it buys 21.6 trillion yen ($234 billion) annually in government bills and bonds, is to re-inflate the economy, and not to allow the government to finance its debt cheaply.

But a limit on rinban, which began in earnest in 2001, makes little sense in isolation. Ben Bernanke, now chairman of the U.S. Federal Reserve, recommended getting rid of it a decade ago. Thanks to a separate, ever-expanding asset purchase programme, which the BOJ put in place in 2010, the central bank already has 120 trillion yen in government securities on its balance sheet. That’s 46 percent more than the 82 trillion yen it has issued in bank notes. Yet yields on Japanese 10-year bonds are below 0.7 percent. Investors don’t appear to care whether or not the BOJ is monetizing government deficits.

Doing away with the rule would allow the BOJ to buy more longer-dated bonds. Under its asset-purchase programme, the central bank can’t buy bonds with a remaining life of more than three years. Stepping up rinban, which allows for purchases of maturities of up to 30 years, would help keep a lid on long-term yields. That may be helpful if Prime Minister Shinzo Abe’s anti-deflation campaign succeeds, threatening Japan’s banks and its pension fund with large losses on their government bond holdings.

Ending the banknote rule would buy the new governor time to weigh the merits of bolder alternatives, like eliminating the 0.1 percent interest the BOJ pays banks on excess reserves held at the central bank. Kuroda could get his BOJ career off to a good start by picking the low-hanging fruit first.

The Japanese government on Feb. 28 nominated Asian Development Bank President Haruhiko Kuroda to be the next governor of the Bank of Japan.
Kuroda, 68, would replace current BOJ governor Masaaki Shirakawa, who will step down on March 19.
The government also nominated academic Kikuo Iwata and BOJ official Hiroshi Nakaso to serve as the central bank’s two deputy governors, said Genichiro Sata, a lawmaker from the ruling Liberal Democratic Party.