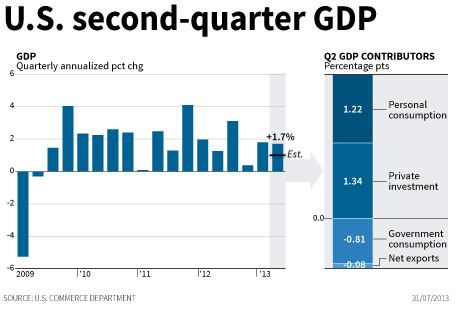 Second-quarter GDP increased at a 1.7 pct rate, fed by 2.2 pct private-sector expansion even as government shrank. Global growth is robust, though America’s slice is smaller. The steady but unspectacular results could cool stocks while bringing the Fed closer to cutting stimulus.

U.S. GDP rose at a real annualized rate of 1.7 percent in the second quarter, the Bureau of Economic Analysis announced on July 31. Economists had expected a growth rate of 1 percent, according to Thomson Reuters.
Gross private domestic investment contributed 1.3 percent to GDP growth, of which inventory accumulation accounted for 0.4 percent. Net exports subtracted 0.8 percent and a decline in government spending sliced off 0.1 percent. Real final sales of domestic product increased 1.3 percent. The GDP price deflator rose at a 0.7 percent rate during the quarter, and the personal consumption expenditures deflator was flat.
Gross Private Product, a figure that excludes government spending, grew at 2.2 percent in the second quarter, compared with 2.4 percent in the first quarter and 1.8 percent in the fourth quarter.