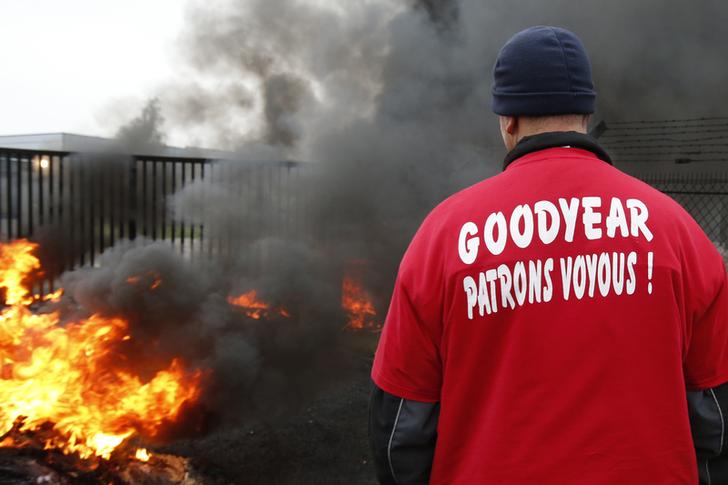 The kidnapping of two Goodyear executives is a sign not of strength, but of weakness, in French employee groups. That explains why labour relations are among the poorest in the OECD. The country badly needs constructive private-sector unions along German or Nordic lines.

An employee of U.S. tyre-maker Goodyear stands in front of burning tires at the entrance of the plant in Amiens, northern France, November 18, 2013 to protest job cuts and the project to close the French plant in Amiens.

French trade unionists released two executives on Jan. 7 after holding them for more than 24 hours at the country’s Goodyear tyre plant to demand higher payouts for more than a thousand planned layoffs. Workers at the idled factory in the northern city of Amiens have been trying to negotiate redundancy terms with management for nearly a year, after Texan tyre tycoon Maurice Taylor withdrew a potential rescue bid on the grounds that French workers were lazy - triggering a political storm.

The so-called “boss-napping” was the first serious case since a spate of them in 2009 prompted conservative ex-President Nicolas Sarkozy to give police powers to intervene by force if necessary.

French union density, or the percentage of employees in unions, is 7.6 percent, according to OECD data. That is the second lowest in the OECD. It compares with an average of 17.5 percent across all OECD countries, 25.8 percent for the UK, 18.5 percent for Germany, and 70 percent in Finland.