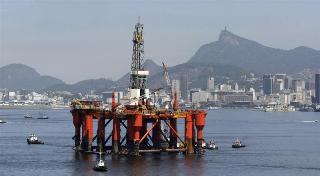 Brasilia is sending Petrobras towards a crash with reality. The policies of President Dilma Rousseff’s administration are to blame for the 39 percent slide in the oil giant’s third-quarter profit, announced after hours on Oct. 25. On top of that, its rising debt, along more investment that will be needed, makes Petrobras look like nothing more than a not-for-profit arm of the government. Even next year’s presidential election might not change that.

It’s hardly the first time Rousseff has played politics with Petrobras’ earnings. It has now got to the point, though, where even analysts are way off when trying to factor in the effects. The consensus sell-side estimate for net income in the three months to September turned out to be 72 percent higher than the 3.4 billion reais ($1.56 billion) the company managed.

The biggest drain from the bottom line comes from Brasilia’s insistence that Petrobras sell diesel domestically 20 percent below the international price. This may help suppress inflation but it caused a refining loss of 8.6 billion reais. Petrobras also has to buy most of its equipment from local suppliers. That provides jobs in Brazil, but also raises costs – and helps explain why exploration expenses soared 70 percent to 2.21 billion reais in the third quarter.

The president has shown some flexibility, allowing Petrobras to raise prices four times since June 2012. But its charges still don’t keep pace either with rising oil prices or with Brazil’s falling exchange rate.

Moreover, Petrobras’ net debt jumped a startling 20 percent this year to $86.5 billion. That equates to almost three times annualized EBITDA for the quarter, whereas Chevron boasts net cash. Chief Executive Maria das Graças Foster reckons she can reduce that in coming months. But she also has to help find the estimated $100 billion needed to develop the Libra oil field, which the Rousseff administration has insisted Petrobras run and take a 40 percent stake in.

With the election 12 months away, there’s little chance Rousseff will stop the gushers – and no reason yet to expect anything different after the vote. Private shareholders might want to find an exit before leaving becomes an emergency.

Net income in the three months ended Sept. 30 was 3.4 billion reais, missing the average estimate of 5.84 billion reais ($2.68 billion) in a Reuters survey of 10 analysts.

Total debt was $112.5 billion at the end of September, a 34 percent increase over the past 12 months.

This item has been corrected to read billion not million in paragraph two.

Net income in the three months ended Sept. 30 was 3.4 billion reais, missing the average estimate of 5.84 billion reais ($2.68 billion) in a Reuters survey of 10 analysts.

Total debt was $112.5 billion at the end of September, a 34 percent increase over the past 12 months.

This item has been corrected to read billion not million in paragraph two.