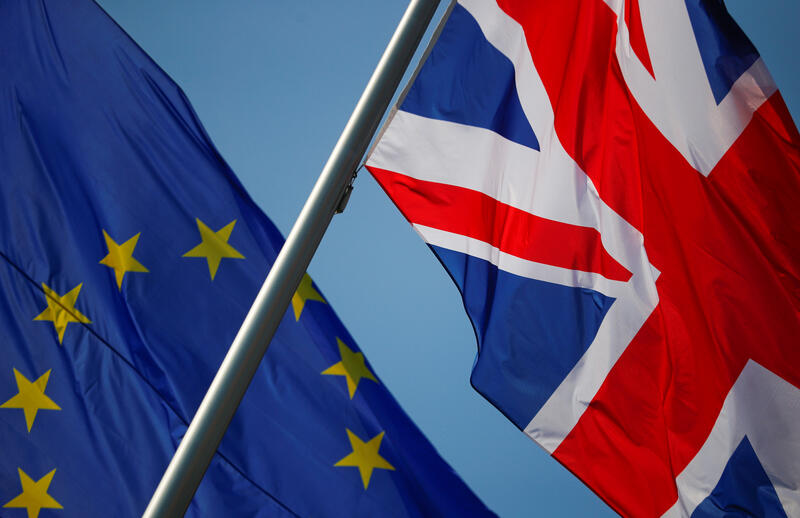 Talks with the European Union over a trade deal are at an impasse. Now Boris Johnson’s government is planning legislation which would undermine the prime minister’s exit agreement, the FT says. It may be a negotiating ploy. Even so, it means a chaotic Brexit is back on the table.

European Union and British flags flutter in front of a chancellery ahead of a visit of British Prime Minister Theresa May in Berlin, Germany, April 9, 2019.

Britain is planning new legislation that will override key parts of the Brexit withdrawal agreement, the Financial Times reported on Sept. 6.

Sections of the internal market bill are expected to “eliminate the legal force of parts of the withdrawal agreement” in areas including state aid and Northern Ireland customs, the newspaper said, citing three people familiar with the plans.

European Union diplomats cautioned that such a step would tarnish Britain's global prestige and heighten chances of a tumultuous EU exit on Dec. 31.

"If the UK chose not to respect its international obligations, it would undermine its international standing," said one EU diplomat. "Who would want to agree trade deals with a country that doesn't implement international treaties? It would be a desperate and ultimately self-defeating strategy."

Britain has set a deadline of Oct. 15 to strike a deal.

"If we can't agree by then, then I do not see that there will be a free trade agreement between us, and we should both accept that and move on," Prime Minister Boris Johnson was to say on Sept. 7, according to his office.

Asked about the report in the Financial Times, British Environment Secretary George Eustice said there might be some minor "legal ambiguities" that needed to be tidied up over the Northern Irish protocol.

"We have a withdrawal agreement, and that includes Northern Ireland Protocol, and we are committed to implementing that," he told BBC radio.

Negotiations were ongoing to "iron out a few remaining technical details" on how the protocol would work and there might then be a need for legislation to provide legal certainty, he said.