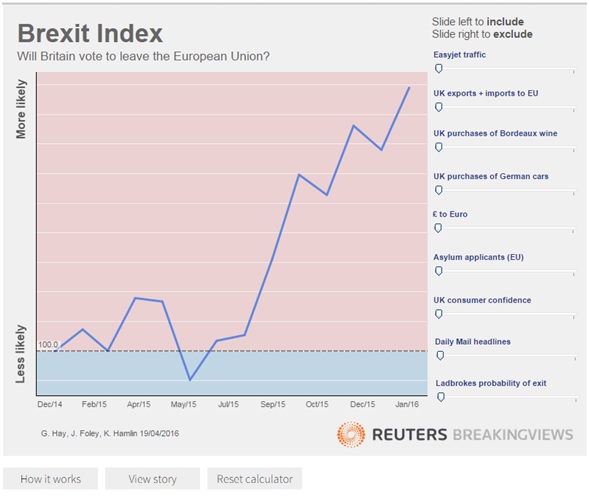 Breakingviews’ Brexit Index shows an ever-higher risk of a UK exit from the European Union in June’s referendum. Unlike the adverse economic figures seen in previous months, the key driver in the newest data is anti-EU media coverage. This isn’t going to go away.

Breakingviews’ Brexit Index shows an increase in the likelihood that UK voters choose to leave the European Union in a referendum scheduled for June 23.

The index takes a selection of inputs, from the value of sterling against the euro to the number of front-page headlines referencing the EU and/or migrants in the UK’s Daily Mail newspaper, and turns them into a single composite indicator.

The latest update incorporates data from February that was released mostly during March and April.

The chance of Brexit had risen 3 percentage points from a month earlier to 34 percent, according to Ladbrokes figures cited by Reuters on April 19.