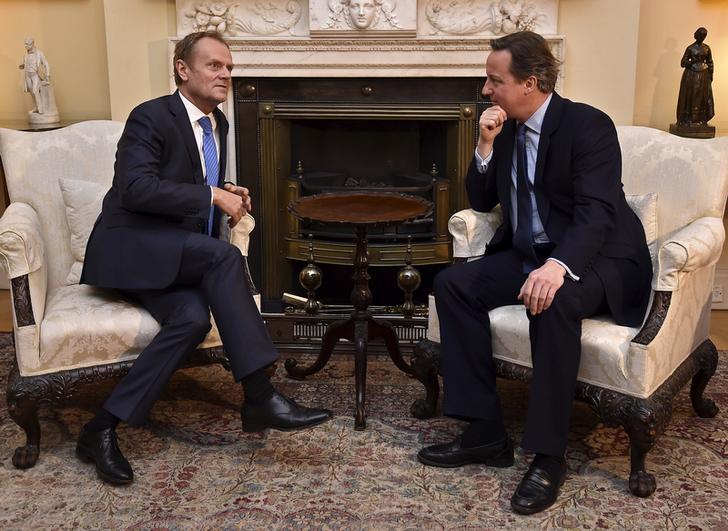 Britons are warming to the idea of Brexit. That message has been increasingly clear since the middle of last year, when polls started to indicate an increase in the number of UK citizens who would vote to leave the European Union in a referendum due by end-2017. According to a proprietary index of statistical inputs compiled by Breakingviews, the data paints a similar picture.

The Brexit index aims to strike a middle ground between sober economic analysis and something rather more qualitative. It includes the most plausible economic indicators that change on a monthly basis – the pound’s strength against the euro, the value of British trade with the European Union, and UK consumer confidence. As each of these goes up, the chance of exiting the EU arguably goes down.

But the debate is about feelings as well as facts. The index factors in figures on Europe-wide asylum applications, which Eurostat discloses every month, volumes of flights to the mostly EU-based destinations to which UK budget airline easyJet flies, and Ladbrokes’ betting odds on a UK-EU split. Other factors to watch are those connected with European “soft power” – for example, UK sales of German cars and imports of French wine.

Less conventionally, there’s the number of front pages of the Daily Mail that directly reference migration or the European Union. For now, those mentions are mostly unsympathetic to the “In” campaign, though that could of course change.

The results show a clear direction of travel. Starting from the summer of 2015, the dominance of Brexit-supporting metrics is clear. Given the scale of immigration into the EU, that’s no surprise. Sure, these readings can be easily challenged. Some will see British trade with the EU, or an improving UK economy, as unrelated to the question of whether to leave. Strip out the effect of trade, for example, and the Brexit trend is less obvious, yet still tangible.

Like all indices, the Brexit index is only as relevant as its most recent data, which has a two-month lag. It will be updated every month. And will hopefully give a jaunty yet still valuable sense of which way the British winds are blowing.

Breakingviews on Feb. 1 launched the Brexit index, indicating the likelihood that the UK population might vote to leave the European Union. A referendum on whether to stay or go is set to be held before the end of 2017.

Prime Minister David Cameron is negotiating the terms of Britain’s relationship with the EU. He and European Council President Donald Tusk failed to reach a deal on Jan. 31, agreeing instead to 24 hours of further discussion.