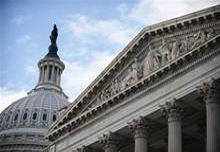 The gridlock that characterized the U.S. Congress in 2013 won’t get any better in the coming year. Midterm elections in November will make extremism more appealing to lawmakers than compromise. That means more stalemate, in which President Barack Obama’s healthcare reform gets more attention than economic policy. Worse, the Republican minority still believes its only real negotiating leverage is to threaten default.

In 2014, the entire House of Representatives and one-third of the Senate is up for election. Generally when campaign years occur in U.S. politics, little legislative work gets done. Lawmakers don’t want to take tough votes that could upset constituents. Instead, they prefer to take ideological stands that help them triumph in primary elections and impress those casting ballots in districts that are often drawn up to benefit one party or the other.

Since congressional gridlock began after the 2010 midterms, the dynamic has largely been one of the House GOP blocking the Obama administration’s plans and the Democrats’ broader goals. That has been easy in the lower chamber, where Republicans have a majority. And in the Senate, their minority has been large enough to filibuster bills or political appointments. That ability ended suddenly last month for most confirmations of job appointments when Democrats changed parliamentary rules – infuriating the GOP, which vowed to retaliate.

Surprisingly, lawmakers reached a bipartisan budget deal in December. That seems to indicate that bargains are possible. But a closer look at the fiscal accord reveals that neither party actually gave anything up. Instead, they focused on uncontroversial tweaks, like cutting wasteful spending. No tough longer-term reforms or tax hikes were enacted.

Easy wins like this aren’t available for the big issues on the 2014 docket, such as reforms to immigration, gun laws and housing finance. In fact, the biggest battle of next year is likely to occur in the spring, when Congress will have to raise the federal borrowing limit again. Last fall, legislators waited until the last instant to do so, narrowly avoiding default.

This time around, with a budget in place for two years, Republicans can’t force another government shutdown. With the GOP striving to impress conservative voters – and still stewing from Senate Democrats’ rule changes – that could mean the debt ceiling fight will be even scarier this time around.

The US Capitol building is pictured in Washington December 27 2012. REUTERS/Mary Calvert