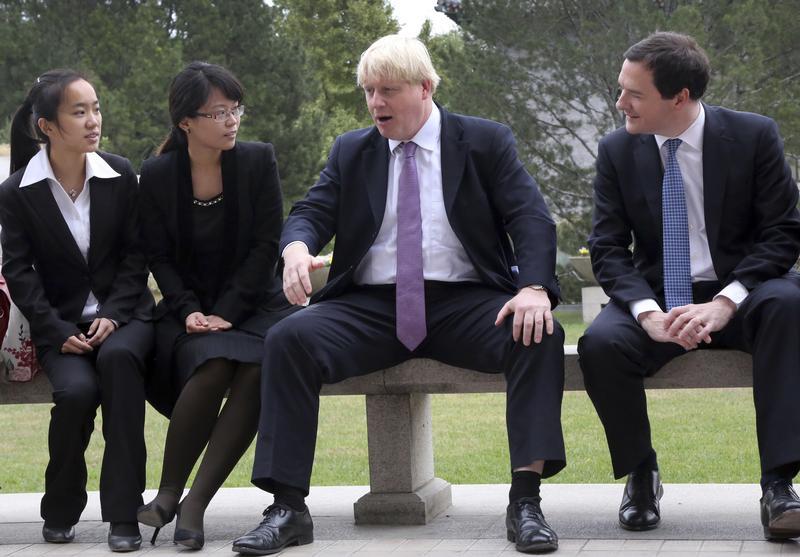 Britain once had nothing to offer China but silver and opium. Now it has holidays, banks and building sites. George Osborne, the UK Chancellor of the Exchequer, and London’s mayor Boris Johnson are using visits to Beijing to say just how welcoming the UK is likely to be. It’s a triumph of openness, and provided the UK chooses its partners carefully and the Chinese are tactful, both sides will benefit.

Simpler visa rules, and Chinese funding for landmark building projects, are easy to like. Overall Chinese tourist spending, according to Barclays, grew an annual 22 percent in the second quarter of 2013. Meanwhile, property developers are putting their ambition, and their access to credit, behind redevelopment of Royal Albert Dock and the Crystal Palace in London and the Manchester Airport complex. It is hard to see how these initiatives pose threats to sovereignty, or security. They will help Britain fund its trade and budget deficits, however, and may lead to more useful investments, say in high-speed rail.

Banks are more contentious. China’s lenders want to set up branches rather than the subsidiaries most of them run today. This would let them take their parent banks’ capital into account. In return, the UK may win a bigger role trading China’s currency. London may get more finance jobs. Yet questions remain about how Chinese banks would behave in a crisis. State lenders and regulators answer to the ruling Communist Party. In the pecking order, foreigners come close to the bottom.

China is unlikely to reciprocate on pure banking activity. Foreign banks have just 2 percent market share in China by assets. As with coveted sectors such as cars and pharmaceuticals, banking in China is still restricted. But precise reciprocity is less important than net financial advantage. Britain needs investment. In principle and in practice, openness is the way forward. The United Kingdom is already welcoming: the country took in foreign investment equivalent to 2.6 percent of GDP in 2012, double the aggregate figure for the OECD countries.

If there’s a risk, it’s that the new investors are unknown quantities. ABP and Zhongrong, the developers behind the Royal Albert Dock and Crystal Palace, have brief and patchy track records. ABP has completed only one development in its decade-long history. Chinese developers also rely on political patronage, which can prove fickle. China may be putting up the cash, but Osborne and Johnson are investing their reputations.

Britain's Chancellor of the Exchequer, George Osborne (R), and Mayor of London Boris Johnson (C) talk to students at campus during a their visit to Peking University in Beijing, October 14

George Osborne, the UK Chancellor of the Exchequer currently on an official visit to China, said he is hoping Britain can forge closer ties with the Asian giant. He has pledged to simplify visa rules for Chinese tourists visiting the United Kingdom. He added that there is “no limit” to the number of Chinese students and tourists Britain can accommodate.
Osborne also said he would make it easier for Chinese banks to open branches in the United Kingdom. Currently they must operate through subsidiaries, which can require more capital and are primarily regulated by the UK’s Prudential Regulation Authority and Financial Conduct Authority, rather than by the bank’s home regulator. The exception is Bank of China, which set up a UK branch in 1929.
Osborne is visiting China for five days, alongside Boris Johnson, mayor of London.