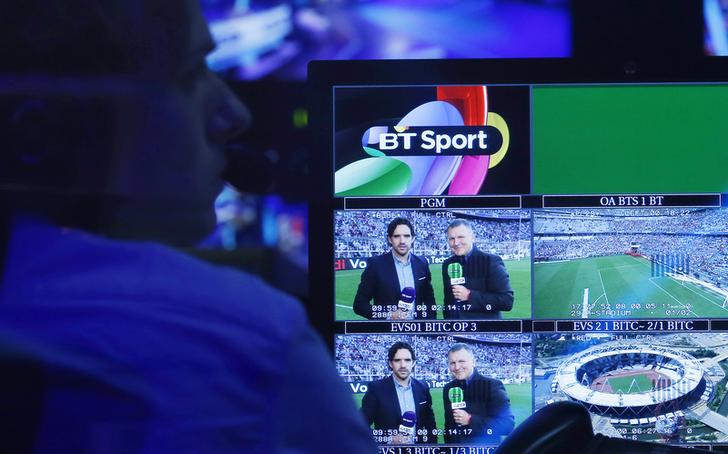 Both groups have produced market-pleasing results. Telco BT, once the poor relation, now trades on a comparable valuation to its satellite rival. Both offer similar earnings growth. However, a lot hinges on who wins what in the next major UK soccer-rights auction.

A production staff member works in the gallery during the BT Sport channel launch program at the BT Sport studio in the Queen Elizabeth Olympic Park, in east London.

BT Group reported forecast-beating results for the quarter to Dec. 31, with revenue up 2 percent to 4.6 billion pounds and pretax profit up 8 percent to 722 million pounds. The British telecom said it now expected EBITDA for the year ending March 31 to be at the “upper end” of its 6 to 6.1 billion pound range.

Shares in BT rose 2.4 percent to 379.7 pence by late morning trading in London.

Shares in BSkyB stood at 861.5 pence by late morning on Jan. 31. The stock plunged from 930p to 829p in November, after BT unexpectedly won the rights to show UEFA Champions League soccer in Britain from 2015 to 2018, but has subsequently recovered some of that lost ground.