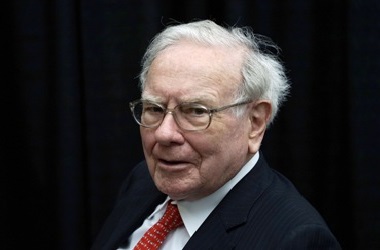 Warren Buffett is an exceptional investor. Take his words for it.

The Berkshire Hathaway chairman’s latest letter to shareholders, published on Saturday, hews to a familiar tradition. The Oracle of Omaha shreds bad financial practices such as deviating from accounting conventions and asset-liability mismatches. He then goes on to explain why it’s OK if his $324 billion insurance-to-mobile homes-to-machine tools conglomerate does it.

Buffett’s dissonance is as frequent as it can be perplexing. He routinely rips Wall Street bankers and yet plunked his money into their high command, Goldman Sachs. Buffett famously called derivatives “weapons of mass destruction” in 2002 and then went on to earn billions of dollars on put options. An avowed aversion to technology stocks, partly because they tend to lack the defensive “moat” he cherishes, hasn’t prevented the Berkshire boss from piling into IBM.

There’s more of the same this year. Buffett at once mocks executives and shareholders who imprudently disregard expenses like stock-based compensation when considering a company’s profitability. He calls on Berkshire’s backers to “ignore a portion of GAAP amortization costs” because they flatter his railroad earnings. Similarly, while noting that “some important financial institutions have gone broke” by lending long at fixed rates with short-term money, his Clayton Homes mobile housing business does it, too, albeit with lots of cash in reserve.

The 85-year-old billionaire is even spry enough to dance between the raindrops of climate change. As at many other companies, there is a ballot initiative at Berkshire urging it to assess and disclose the dangers of a warming planet to its insurance businesses. Buffett acknowledges that it is a real and important issue for humanity, but that his shareholders needn’t worry their pretty little heads over it.

It’s hard to quibble with so successful an investor, especially one who has been dishing out plainspoken, practical advice on the subject for over a half-century. Maybe the real secret of Buffett’s success, however, is that for nearly every homespun rule of thumb suitable for everyone else, he stands as the exception.