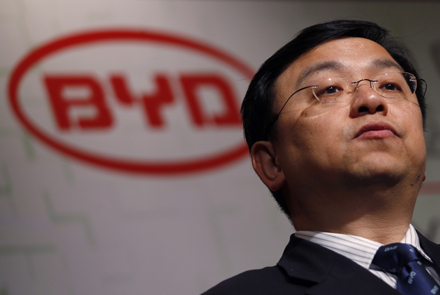 Warren Buffett doesn’t usually like companies in which the top managers are selling when the share price falls. By that standard, the Omaha investor must not be too happy with his Berkshire Hathaway’s 2008 purchase of 9.9 percent of Chinese electric automaker BYD.

Buffett is still up on his investment, but BYD’s Hong Kong-listed shares are down 84 percent from their 2009 peak, and the Shenzhen-listed shares have tumbled more than 40 percent in the last three months. The company warned in April that its first-half net profit will fall by between 75 and 95 percent. Despite the sharp correction, insiders are still rushing to the door. In July, key executives and other big shareholders have sold about $133 million shares, or 3 percent of its market cap.

The withdrawal of the 2009 government stimulus has sharply slowed down passenger vehicle sales growth – from 33 percent in 2010 to 5.2 percent in 2011. Domestic producers, who mostly serve the poorest and most price-sensitive customers, saw their market share fall to 41 percent in the half from 44 percent only six months earlier, official data show.

BYD did not anticipate the change in trend. It expanded aggressively in the past two years, and the ratio of debt to assets rose from 53 percent to 64 percent between 2009 and 2011, while operating cash flow is deteriorating.

Many potential customers fear that the low-cost domestic cars aren’t as safe as foreign brands. The percentage of Chinese automobile buyers wanting to purchase a European vehicle has increased from 25 percent in 2009 to 35 percent this year, according to JD Power. Those fears help explain the attention given to a June crash which killed all the occupants of a BYD electric taxi, while no one in the other two cars involved was badly hurt. A government-led probe cleared the electric battery in the accident.

Buffett was attracted to the BYD concept: make electric cars widely available in a country that is short on energy. The reality – of shifting government policies and persistent consumer doubts – is proving much more difficult.

Key executives and other big shareholders of Chinese car and battery maker BYD have sold shares worth about $133 million in July, according to the Shenzhen Stock Exchange.

Shares of BYD have fallen about 45 percent in the three months to Aug. 3 in Shenzhen, after the company warned in April that its first-half net profit will fall by 75 percent to 95 percent.

BYD said on Aug. 3 that a government-led probe cleared its electric battery in a June accident, when a Nissan sports car travelling at more than 90 miles an hour slammed into a BYD e6 electric taxi. The taxi burst into flames, killing all three people inside.