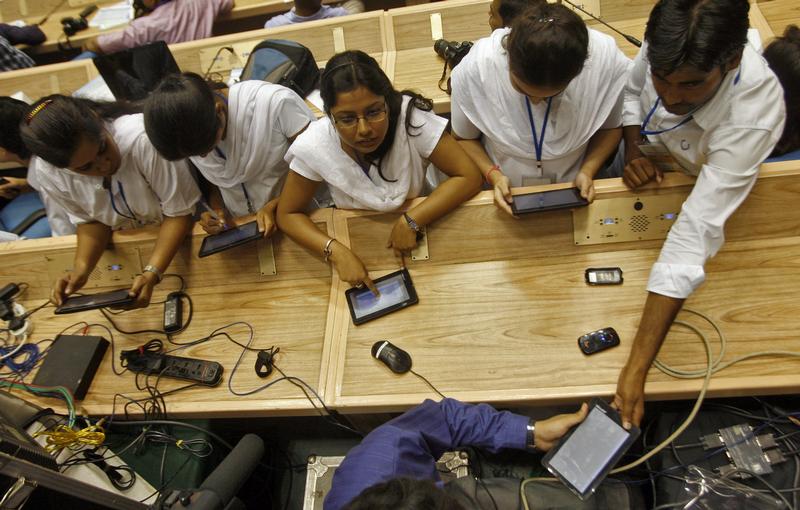 After raising fresh funds for overseas expansion, the Indian learning app is valued at $3.8 bln and growing fast despite pricey subscriptions. Success feeds off proud parents and lousy schools. On the verge of profit, Byju’s is a reminder that unicorns can grow without subsidies.

Students use Aakash, which means sky, dubbed the world's cheapest tablet computer, after its launching ceremony in New Delhi October 5, 2011. Aakash will be sold to students at the subsidised price of $35 to expand digital access in the Asian giant that lags peers such as China and Brazil in connectivity. REUTERS/Parivartan Sharma (INDIA - Tags: SCIENCE TECHNOLOGY BUSINESS) - GM1E7A51K7001

Indian learning app Byju’s said on Dec. 17 that Naspers and the Canada Pension Plan Investment Board had led a $540 million investment into the company. That values the provider of digital education content at $3.8 billion, according to a person familiar with the situation.

The funding will support Byju’s plans to invest in technology and support international expansion. India has the largest school-age population in the world.

Byju’s launched its smartphone app in 2015, offering personalised online programmes for school students in India. The company boosts over 2 million annual paid subscriptions. The company expects to triple its revenue to 14 billion rupees ($200 million) this year.

Byju’s other investors to date include General Atlantic, the Chan-Zuckerberg Initiative, Tencent, Sequoia, and Times Internet. The latter is the digital venture of Times of India, the country’s largest media and entertainment group.