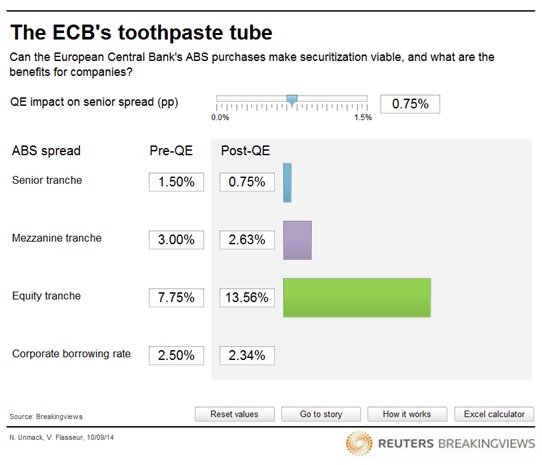 The ABS programme, revealed on Sept. 4, aims to encourage Italian and Spanish banks to lend. To do so, lenders have to be able to transfer risk by packaging up the new loans then selling them as ABS. But because the ECB doesn’t want to take much risk itself, it will only buy the least-risky, senior-ranking bonds without a guarantee.

Hence investors are still needed to buy the riskiest, lowest-ranking equity tranches. To get them interested, there needs to be enough spread left over after servicing senior and middle-ranking debt to pay equity holders a double-digit return. Right now senior spreads are too high, leaving too little for equity investors.

Breakingviews’ calculator envisages a hypothetical CDO of loans to small companies in the euro zone periphery, with a spread after costs of 2.5 percent. At current prices the return on the equity tranche, before defaults, is a paltry 8 percent. But imagine ECB bond-buying halves the spread on the senior bond, and the spread on middle-ranking bonds falls half as much as investors are compelled to take more risk. Equity returns would rise to 13.5 percent.

Investors might be even more interested if the CDO was more highly leveraged. Breakingviews assumes the highly rated senior tranche constitutes 65 percent. Ratcheting this up to 80 percent would boost equity returns above 16 percent. The CDO wouldn’t necessarily become much riskier if lots of loans were pooled, and it didn’t consist only of southern European credits which tend to be lower-rated. Deals could also use guarantees from the European Investment Bank.

Before 2008, senior tranches traded way under half today’s spreads. The snag is that since 2008, regulations and ABS stigma have damaged investor demand. Draghi may be hoping his purchases persuade regulators and investors to think again. But ultimately investors will need to believe that the economy won’t tank to buy a product that gives direct access to defaults.

The European Central Bank announced on Sept. 4 a purchase programme for asset-backed securities and covered bonds. The purchases will start in October and “have a sizeable impact” on the ECB’s balance sheet, ECB President Mario Draghi said.

The European Central Bank announced on Sept. 4 a purchase programme for asset-backed securities and covered bonds. The purchases will start in October and “have a sizeable impact” on the ECB’s balance sheet, ECB President Mario Draghi said.