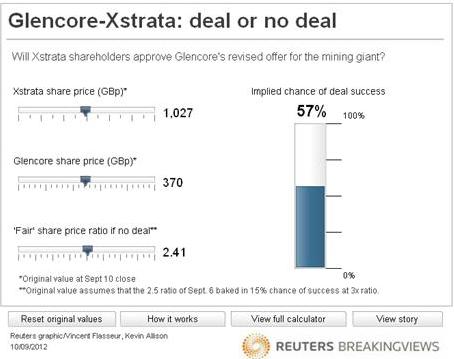 The market appears overly sceptical about Glencore’s chances of success with its raised offer for Xstrata. Breakingviews’ calculations suggest the companies’ shares are pricing in just a 57 percent likelihood of the Swiss commodity trader’s revised bid for the mining giant succeeding. That feels unusually low given that Glencore’s offer is hard not to recommend.

Clearly, investors are concerned about whether the Qataris will vote their 12 percent Xstrata stake in favor of the improved deal. But Glencore’s final offer, at double the original premium, means odds are that the big sovereign wealth investor will go along in the end. Residual competition concerns or technical factors like Glencore’s small free float must also play a role. This deal could be a long way off from completion – so the time value of money needs factoring in too.

Still, all these factors may not fully explain such a big gap. There’s an additional possible explanation. Merger arbs are worried about the risk of another last-minute hitch given this supposedly simple and inevitable deal has shown such a capacity to spring surprises.

One Xstrata share was worth 2.77 Glencore shares at the close of trading on Sept. 10. That was up from 2.5 times on Sept. 7, the day before the Swiss commodity trader surprised markets by sweetening its offer for the mining giant, but still below Glencore’s improved deal ratio of 3.05.