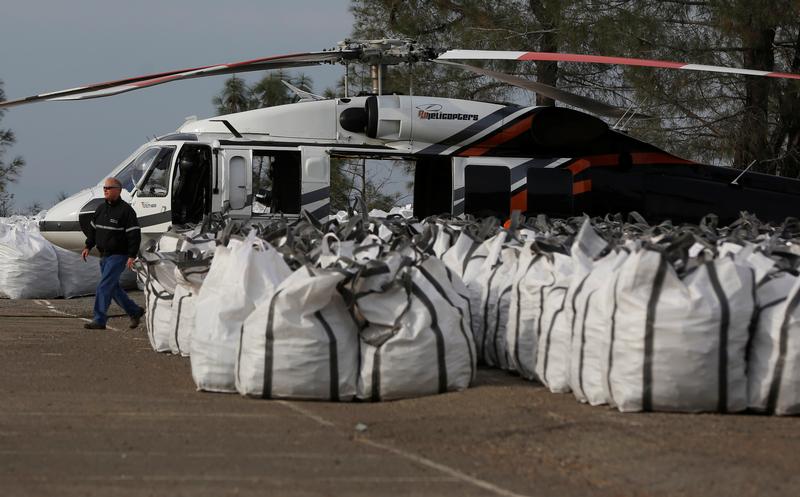 The Oroville reservoir damage goes beyond a $200 mln repair bill and mass evacuations. It shows a lack of investment that has left U.S. infrastructure under-maintained. Trump’s financing plans may not suit the likes of Oroville. Establishing a proper price for water would.

Rock is prepped to be used on the Lake Oroville Dam after an evacuation was ordered for communities downstream from the dam, in Oroville, California, U.S. February 13, 2017. REUTERS/Jim Urquhart

Operators at Oroville dam in California on Feb. 13 were preparing to seal the emergency spillway that the California Department of Water Resources said the day before was "predicted to fail."

The water level at the nation's highest dam was falling by up to 4 inches an hour on Feb. 13 thanks to a combination of fair weather and officials increasing the flow out of the main spillway to 100,000 cubic feet per second. That's similar to the usual tourist-season flow over Niagara Falls. The main spillway for dealing with overflow at Oroville has sustained at least $200 million of damage.

The emergency spillway – essentially a hillside – was used for the first time in the dam's 49-year history to handle flows of between 6,000 and 12,000 cfs but quickly began to deteriorate. Federal officials said in 2005 that the emergency spillway could handle 350,000 cfs.

So far almost 190,000 residents in the area have been ordered to evacuate. Heavy rain is forecast for later in the week.

Oroville dam, which also houses a hydroelectric power plant, is some 75 miles north of Sacramento and 160 miles by road northeast of San Francisco.