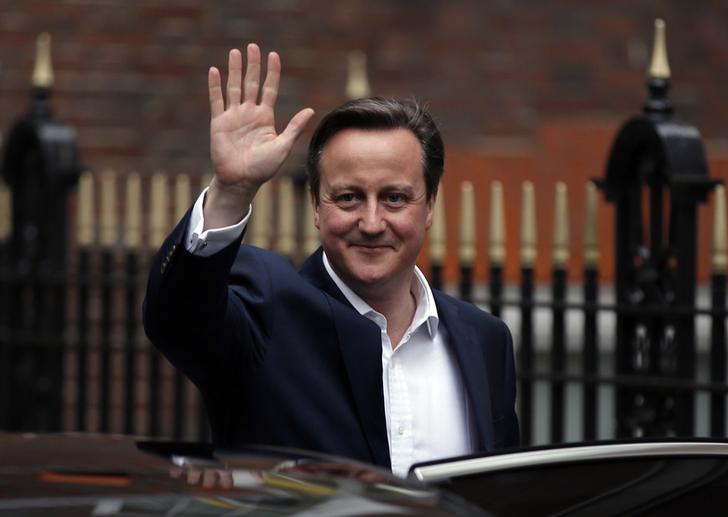 UK stocks and bonds, and the pound, have jumped after the surprise election success of Prime Minister David Cameron’s Conservatives. That’s to be expected given earlier fears of a messy outcome. But Cameron has his work cut out to sustain the relief rally.

The blue-chip FTSE 100 stock index rose 1.5 percent, coming within spitting distance of its record highs, after an election victory which now looks set to allow the Conservatives to govern alone for the first time since 1992. Benchmark UK 10-year government bond prices rose as yields fell as much as 13 basis points to 1.79 percent, and sterling rallied to $1.5522, its highest level against the dollar in more than two months.

The euphoria is understandable, with policy continuity, governing stability and business and investor-friendliness all far more secure than had been expected until well after the polls closed on Thursday. But it won’t last.

The biggest stumbling block is Cameron’s promise to hold a referendum on Britain’s membership of the European Union. Uncertainty about the outcome could see UK equities, debt, and sterling underperform, just as they did before this election and in the runup to last year’s referendum on whether Scotland should remain within the UK. A key question for asset prices and growth is whether business investment will be dampened or delayed by uncertainty over the EU question.

Second, the huge gains scored by the Scottish National Party could pave the way for a fresh battle over independence. Cameron is a unionist, but the SNP’s 56 seats out of 650 at Westminster give it firepower and point to regional divisions that he will want to address.

Thirdly, a narrow outright majority will present political problems that are different – and perhaps tougher for Cameron – than those faced by the larger Conservative-Liberal Democrat coalition of the past five years. Rebel Conservative members of parliament will have more ability to disrupt the agenda. By-elections, too, will pose a bigger risk – and 21 such votes were held between 2010 and 2015.

The EU referendum is promised by the end of 2017, but some or all these concerns will loom much larger well before then. Investors may not give Cameron much of a honeymoon before they become more demanding.

British financial markets rallied on May 8 as results of the previous day’s general election pointed to a shock outright victory for Prime Minister David Cameron’s Conservative Party, wiping away the uncertainty for investors that a hung parliament had threatened to deliver.

British financial markets rallied on May 8 as results of the previous day’s general election pointed to a shock outright victory for Prime Minister David Cameron’s Conservative Party, wiping away the uncertainty for investors that a hung parliament had threatened to deliver.