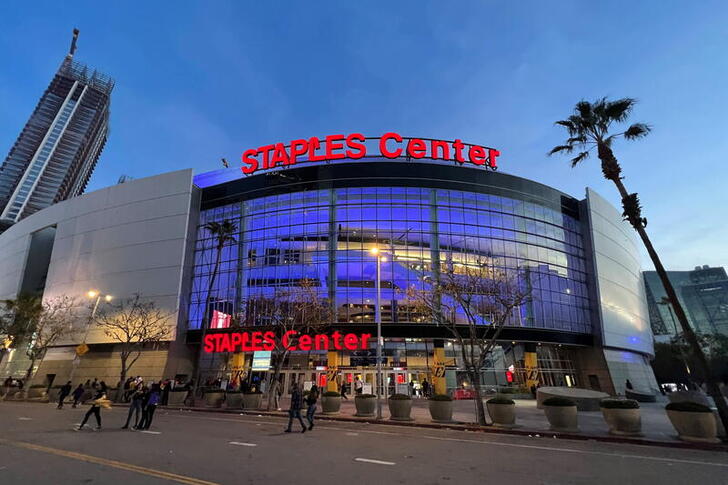 Field of dreams. Cryptocurrencies have arrived at the ballpark. Crypto.com, a Singapore firm that allows users to buy, sell and pay with cryptocurrencies, is paying $700 million over 20 years to slap its name on Staples Center in Los Angeles, according to two people familiar with the deal. At $35 million a year, that’s among the priciest deals ever.

It’s possible it makes sense for now. Crypto-platforms have quite a few competitors, and some of them are very valuable. Crypto.com is private, but rival Coinbase Global is worth $89 billion. Publicity might lead to snowballing popularity before valuable dominance in the market is cemented.

Still it turns out that stadium naming has a pretty poor batting average. A baseball stadium in Houston, once named after defunct company Enron, now carries the label of juice-maker Minute Maid. The home of the Philadelphia Flyers, previously Wachovia Center, is aptly named the Wells Fargo Center. Even Staples is scrapping by in a paperless world. So splashing a corporate logo on a sports stadium may be relatively fleeting. Hubris, however, is eternal. (By Robert Cyran)

Lasting buzz. Diageo is projecting confidence. The Smirnoff maker wants to grow its booze market share to 6% in 2030 from 4% last year. It helps that drinkers are eschewing wine and beer in favour of spirits. The group run by Ivan Menezes is also piling into drinks like tequila, set to grow by 11% annually over the next five years, and China.

Assume the global drinks market grows by 3% a year from researcher IWSR’s 2020 estimate of $1 trillion, and sales could reach $1.4 trillion in 2030. If Diageo hits its 6% target, and keeps around 31% of gross sales after paying distributors and excise duties, then its revenue could be 26 billion pounds in that year. On a multiple of 8 times sales, Diageo’s enterprise value would be 208 billion pounds in 2030, or 139 billion pounds today when discounted using NYU Stern’s 4% cost of capital for the drinks sector. Take off debt, and Diageo’s equity should be worth 127 billion pounds, around 40% more than its current market capitalisation. Yet with competitors like Pernod Ricard and Rémy Cointreau also bingeing on expensive drinks, Menezes will have to fight to keep his place at the bar. (By Dasha Afanasieva)

May the odds be ever in your favour. Evolution and U.S. gaming rival DraftKings have both been dealt the same bad hand. The group run by Martin Carlesund lost as much as 8% of its value on Wednesday after Bloomberg reported that a rival complained to a U.S. regulator that the Swedish gaming company operates in some countries illegally. DraftKings faced a similar accusation earlier this year from a short seller. Evolution has denied the claim, saying its games can’t be played in any countries where gambling isn’t legal, or which are on the U.S. sanctions list.

The DraftKings scandal seems to have done little lasting damage, suggesting Evolution needn’t panic. Still, it’s a reminder that its technology, which connects virtual gamblers to real life roulette tables, is used by punters in many different countries, potentially making them hard to track and leading to unpredictable risks. Business is good: sales nearly doubled year-on-year in the three months to September, and Evolution’s shares have risen nearly 80% this year, trading at a high-flying 27.6 times 2021 sales, per Refinitiv data. After a good run, it’s small wonder investors are taking some chips off the table. (By Karen Kwok)

Smoothly snubbing Elliott. SSE has told Paul Singer where to go. The $24 billion UK utility on Wednesday set out plans to invest 12.5 billion pounds to 2026 and more than treble renewable energy capacity to 13 gigawatts by 2031. About 3 billion pounds will come from selling a 25% stake in its networks arm. That’s well short of the full split that Singer, who runs activist investor Elliott Management, appears to be pushing for.

Elliott thinks SSE shares, which dipped 5% to 15.79 pounds on Wednesday morning, are worth less than the sum of the company’s parts. Yet SSE’s key role in enabling the United Kingdom to meet its target for generating 40 gigawatts from wind power by 2030 makes a split politically tricky. The company also reckons it would mean 95 million pounds of additional annual costs. Singer could encounter the same issue as rival activist Dan Loeb has encountered at oil giant Royal Dutch Shell. When it comes to companies transitioning to zero-carbon energy, many stakeholders think they are better together. (By George Hay)

Lost InPost. E-commerce bulls have been shown a red flag in Poland. InPost, which operates lockers used by people receiving parcels ordered online, on Wednesday lowered its sales forecast because e-commerce isn’t expanding as much as it anticipated. The company now expects revenue this year, including newly acquired French business Mondial Relay, of 5.6 billion zlotys to 5.8 billion zlotys, down from previous guidance of 5.9 billion zlotys to 6.2 billion zlotys.

It’s always worrying when companies slash their forecasts this close to the end of the year. Besides, there are few signs of a broader slowdown. Allegro, the $11 billion Polish e-commerce group, this month reported a near-20% jump in the value of goods sold on its platform. InPost is still expecting full-year revenue to grow by at least 37%, before acquisitions. The company’s shares, which have repeatedly traded below this year’s 16 euros initial public offering price, fell 13% to 12.7 euros on Wednesday morning. Including debt, it’s now valued at around 5.7 times this year’s reduced revenue forecast. Investors may ask Chief Executive Rafał Brzoska for a better explanation. (By Dasha Afanasieva)

The bigger they come. The more than A$15 billion ($11 billion) hit to Commonwealth Bank of Australia’s market value on Thursday seems unjustified on first look. The country’s largest lender posted first-quarter earnings of A$2.2 billion, maintaining an annualised return on equity above 11% that bests its major rivals. Trouble is, the results show its huge premium to peers is unsustainable.

Shares in the bank run by Matt Comyn closed on Wednesday at more than 2.4 times book value for the next 12 months, per Refinitiv. National Australia Bank, its closest competitor, trades at just under 1.5 times book, even though its ROE for its financial year to the end of September was 10.7%.

Shareholders had given Commonwealth credit for growing quicker than the market. But its all-important net interest margin fell by around 0.1 percentage points in the quarter, Citi estimates, as rampant competition in the heady mortgage market took its toll. If the top dog can be hobbled, too, it doesn’t deserve to be so far ahead of the pack. (By Antony Currie)

A general overall view of the Staples Center exterior in Los Angeles on November 15, 2021.