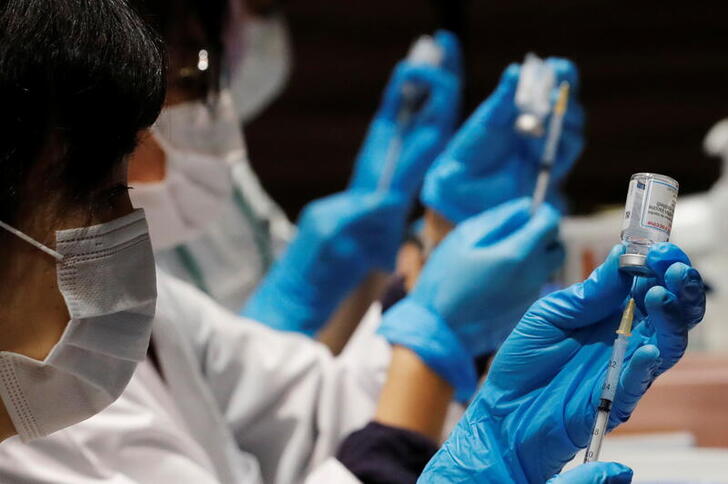 Moderna love. Stephane Bancel, boss of $168 billion vaccine producer Moderna, has a problem, but it’s a good one. His company’s shares are up 20-fold since the end of 2019, it has joined the S&P 500 Index, and second-quarter sales of $4.4 billion came from almost nothing a year earlier on the back of Moderna’s messenger RNA jab against Covid-19.

The company has vaccine orders for 2022 and 2023, and variants and booster injections could extend that revenue for longer than most people hope. Still, the challenge is to avoid Moderna shrinking as pandemic demand subsides. In Thursday’s earnings call, Bancel talked about a product pipeline that includes a flu jab and mRNA-based therapeutics for a range of diseases.

Moderna – with a $12 billion cash pile that’s rapidly growing – also said it may license other treatments or acquire businesses. Bancel is starting to fill the potential future gap, but Covid-19 vaccine demand will be hard to replicate. That may explain the company’s modest new $1 billion share buyback program. Ramping it up in the future could help keep investors sweet. (By Richard Beales)

With Veoneer shares trading 5% above Qualcomm’s bid, some investors clearly reckon this is only the first lap. Yet even though it may be able to extract $100 million in annual savings, Magna would be brave to go up against a rival six times its size. Qualcomm investors who pushed the stock down 1.5% on Thursday might not like the price, but the two bidders’ respective engine sizes suggest any car chase won’t last long. (By Ed Cropley)

About time. A U.S. private-equity tax loophole has survived for years despite bipartisan efforts to get rid of it. On Thursday, Democratic Senators Ron Wyden and Sheldon Whitehouse took another shot. The carried-interest break allows investment profit to be taxed at the lower capital-gains rate of 20% instead of the top personal income levy of about 37%. For buyout barons, these gains are essentially performance fees and should be taxed that way.

Lobbyists have managed to save the carveout whenever it was at risk. In 2017, for example, then-President Donald Trump said he wanted to eliminate the perk but it didn’t happen. The current effort involves a process that doesn’t require Republican support in the evenly split Senate, and it finally gives the measure a chance at becoming reality.

The change, which alongside other tweaks would raise an estimated $63 billion over 10 years, would help pay for a $3.5 trillion plan to improve the environment and childcare. It’s small in dollar terms but big in fairness, making it a partisan punch the Democrats would be happy to land. (By Gina Chon)

The price is right. When in doubt, copy Walt Disney. ViacomCBS said on Thursday it had signed a deal with “South Park” creators Trey Parker and Matt Stone to create 14 movies exclusively for its streaming service Paramount+. The move is right out of the Marvel playbook.

ViacomCBS cable network Comedy Central has been the long-time home of the four foul-mouthed boys. Extending the franchise is one way for Paramount+ to boost the more than 40 million subscribers it already has worldwide. Spinning out new characters has done wonders for Disney+. Marvel’s “Loki” and Star Wars television spinoff “The Mandalorian” helped boost the subscriber base for Magic Kingdom’s flagship service to more than 100 million.

ViacomCBS paid Parker and Stone around $900 million, according to Bloomberg, for a package that also includes more seasons for Comedy Central through 2027. That’s nearly double what AT&T’s HBO paid for “South Park” streaming rights in 2018. But as subscriber growth slows for the industry, ViacomCBS boss Bob Bakish may find the price is worth paying. (By Jennifer Saba)

Grain pain. Bayer is still seeing little benefit from its $66 billion purchase of Monsanto. Although Chief Executive Werner Baumann raised the German drugs-to-seeds group’s revenue targets for the year on Thursday, he spooked investors after the EBITDA margin in the crop science unit, which includes the Monsanto business, collapsed to 20% in the quarter ending June 30, compared to 28% in the same period last year. That division is reeling from a wave of lawsuits linked to its Roundup weedkiller. Shares fell as much as 6%.

The poor yield is hard to reconcile. Farmers rely on Bayer’s weedkillers and fertilisers to bolster their crops. With soya prices soaring, the German group should have been able to pass on any extra costs. The good news is that Baumann is reviving the sickly pharmaceutical division, which faces loss of exclusivity on blood-thinner drug Xarelto, with the $2 billion purchase of Vividion Therapeutics. But the more slip-ups he makes, the more investors may wonder whether Bayer is the best owner of its sprawling businesses. (By Aimee Donnellan)

Sticking plaster. Nivea maker Beiersdorf is feeling the sweet tingle of relief. On Thursday the 26 billion euro company said it expected its 2021 group sales to rise by close to 10%, as it said organic sales rose 16% year-on-year in the six months to June.

New Chief Executive Vincent Warnery’s strategy of boosting investment in old brands consumers take for granted, even as Covid-19 suppressed demand, appears vindicated. Marketing and selling expenses were a third of sales in the first half of the year, broadly in line with last year.

It also highlights an odd fit. As well as toiletries, Warnery sells adhesives in the company’s tesa division, which has grown 28% organically so far this year, and has a higher operating margin and completely different client base from the larger consumer unit. The group’s controlling family would have to OK it, but a glue spinoff could raise 2.5 billion euros, according to Breakingviews calculations, to further boost Beiersdorf’s recovery. (By Dasha Afanasieva)

Rainy day. Japan’s largest auto marques are showing their strength. Toyota Motor and Honda Motor beat estimates on Wednesday; Honda lifted its full-year profit guidance by 18%. Even long-battered Nissan Motor rode the wave, with global sales up 63% in the three months to the end of June, helping it post an unexpected profit and hike its earnings outlook.

Commodity prices and a global chip shortage are issues, but the trio is managing them better than U.S. rivals like General Motors, whose stock fell almost 8% after reporting earnings on Wednesday.

That makes the liquidity buffers the Japanese carmakers accumulated during the pandemic stand out. Toyota had 5 trillion yen ($46 billion) in cash and equivalents at the end of the quarter, down from 7 trillion yen a year earlier but well above its pre-Covid-19 average and double GM’s stash. Honda’s stack looks high, too. With Tokyo pushing Japan Inc. to stop hoarding and hike wages, such balance sheet conservatism is getting harder to defend. (By Pete Sweeney)

Healthcare workers prepare doses of the Moderna coronavirus disease (COVID-19) vaccine before administering them to staffers of Japan's supermarket group Aeon at the company's shopping mall in Chiba, Japan June 21, 2021.