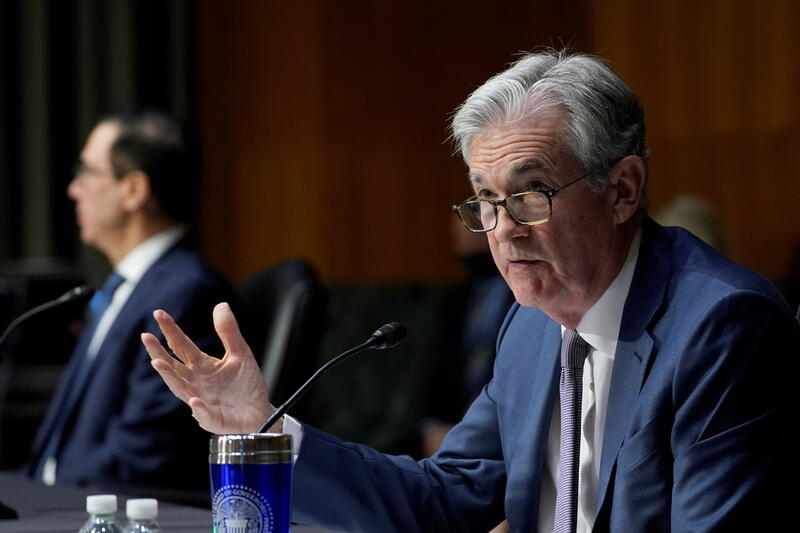 Poker face. U.S. Federal Reserve boss Jerome Powell is keeping his cards close. The central bank on Wednesday maintained the status quo on interest rates and $120 billion in monthly asset purchases, as expected. He was more optimistic about the economic outlook, but Powell refused to hint at his tapering timeline. He needs to stop playing poker.

Americans are feeling good about the economy again. The Conference Board’s consumer confidence index in April was at its highest level since February 2020. Meanwhile, the S&P CoreLogic Case-Shiller house price index jump 12% in February, the fastest pace since February 2006.

Still, Powell said on Wednesday that it’s not time to talk about tapering bond purchases. That’s meant to happen when the Fed reaches its twin goals of long-run 2% inflation and so-called full employment, the latter being a somewhat nebulous goal.

If the economy continues to improve, the Fed may quickly start to look overly accommodating. If he gives the market time to prepare, the transition to tapering could potentially be done without the market blindly going all-in. (By Gina Chon)

Bog ahead. Shopify warned in February the pandemic’s end would slow growth. Yet the e-commerce tools and services seller reported accelerating growth on nearly every metric on Wednesday. Investors went bananas. They may regret it.

First-quarter revenue more than doubled compared to last year, and earnings ballooned to more than $1 billion thanks to a stake in lender Affirm AFRM.O. Shopify, co-founded and run by Tobias Lutke, still warns that growth this high is temporary, as vaccinated consumers will shop more in-person than they did over the past year. It also points out additional online sales came thanks to March’s $1.9 trillion U.S. stimulus package.

Still investors are opting to see the glass half full. While the stock was hit after its February warning, this time it rose about 10%. Shopify is building out fulfillment and shipping, growing its cash and gaining customers. But at some 30 times estimated sales over the next 12 months, according to Refinitiv figures, nearly 10 times higher than Amazon.com, even a small deceleration would be painful. (By Robert Cyran)

Earning its wings. Boeing is discovering that less bad news is still not great. The aircraft maker said on Wednesday that its deliveries rose significantly, but it still burned almost $3.7 billion in cash from its operations in the first quarter. And revenue was $15.2 billion, a 10% drop compared with a year earlier. Unimpressed investors drove shares down almost 4%.

The commercial airlines division, which makes planes for consumer airlines, was still weak, with revenue down almost a third. While sales in the Chicago-based company’s defense business grew, by 19%, it couldn’t make up the difference. The bit of good news was that deliveries, which are what actually bring cash in the door, jumped 54% for commercial planes.

The trouble is those deliveries are still being rejigged. Last week American Airlines said that it had negotiated some settlements with Boeing to change around orders and reschedule the deliveries to later date. Neither is a perfect outcome for Boeing, and in this market, extra clarity isn’t enough to offset continued soured results. (By Lauren Silva Laughlin)

Legal risk. The law firm that represented Princess Diana in her divorce is considering an initial public offering. Mishcon de Reya on Wednesday said it may list on the London Stock Exchange later this year, with a valuation of as much as 750 million pounds, according to the Financial Times.

That looks punchy. Mishcon expects revenue of around 188 million pounds for the year to April 9. Its UK peers, such as DWF, are valued on average at 2 times sales including debt, according to Refinitiv data, implying a valuation of around half the mooted amount. Its partners want to more than double revenue to 400 million pounds in five years, an ambitious move given uneven revenue growth in recent years.

True, Mishcon has good pedigree, and no debt. But listed law firms can be tricky investments: aggressive expansion can backfire, and partners may struggle to get lucrative business under the public glare. Mishcon will use the money to shift its business to non-legal areas, such as consulting, which may have higher growth, but are also less tested. Caveat emptor. (By Dasha Afanasieva)

Ready player one. Australia has fully engaged in the battle royale over apps. Trustbusters Down Under warned on Wednesday that regulation may be needed to address the dominance of Apple’s App Store and Alphabet’s Google Play Store.

In an interim report, the Australian Competition and Consumer Commission recommended, among other things, that smartphone users be allowed to remove and replace pre-installed apps. It also said app stores should not restrict consumers from learning about alternative payment options.

The news comes barely a week ahead of “Fortnite” parent Epic Games getting its day in court over related allegations that Apple’s App Store is anticompetitive. Although the ACCC’s recommendations won’t directly impact that U.S. lawsuit, it wouldn’t be surprising to see the agency support Epic’s similar claims in Australia.

Apple’s highly profitable services business, which includes app downloads, is increasingly important for the $2.3 trillion company, whose latest earnings are due out later on Wednesday. The mounting scrutiny could prove harder to defend. (By Jeffrey Goldfarb)

On the turn. UK grocers’ pandemic heyday is nearing the end of its shelf life. J Sainsbury reported a 39% fall in operating profit for the year to March 6 after splurging 485 million pounds covering staff absences, buying protective gear and installing things like plastic barriers around check-outs. The extra charges and its decision to forgo business-rates relief wiped out most of the benefits of a 7.8% surge in its grocery business. Sainsbury’s shares dropped nearly 3%.

Top line growth is looking vulnerable. As the economy reopens, punters will have reduced need for big shops, which will put pressure on sales. They are also likely to return to the bargain aisles of German discounters Lidl and Aldi, which failed to boost market share during lockdowns due to an absence of online delivery options. Sainsbury’s shares are still up 7% from their pre-pandemic levels. But with stubbornly high costs and the threat of stalling revenue, that performance may be on the turn. (By Aimee Donnellan)

South American resilience should mollify concerns about credit quality. If Botin can keep dud loans at 1.08% of lending, meaning perhaps 10 billion euros in annual loan-loss provisions, she stands to make 8.6 billion euros in annual net income, according to Breakingviews calculations based on Refinitiv-compiled analyst estimates and a 36% tax rate. That would equate to an impressive 13% return on tangible equity, implying shares currently priced at 80% of tangible book value should trade at a premium, assuming a 10% cost of equity. Such would be a fitting riposte to market sceptics. (By Christopher Thompson)

Not content. Two Oscars and a bumper profit in the same week just aren’t enough for some people – specifically Sony’s management. Bosses at the $137 billion Japanese electronics and entertainment conglomerate cautioned on Wednesday that operating profit this financial year would probably come in just below the decade-plus high of 971 billion yen ($9 billion) reached in the one just ended in March.

Sony’s shares have rallied 75% in 12 months as pandemic lockdowns boosted demand for its movies, music and games, helped by the November launch of PlayStation 5. Sunday’s surprise best-actor award for Anthony Hopkins in Sony Pictures’ “The Father” was icing on the cake.

Sony’s shares have not done much since February. But the company’s focus on buying as well as developing its own content makes it a busy player in a hot market. Sell-side analysts’ optimism remains largely undaunted. They’ll be glued to their screens hoping for a more upbeat tone at next month’s investor day. (By Jennifer Hughes)

Every breath you take. China rolled out new anti-espionage regulations this week to prevent foreign spies from infiltrating the country’s companies. These, report state media, will entail putting pressure on businesses in sectors including “national defense, diplomacy, economy, finance and high-tech” to reduce unnecessary overseas travel, and to prepare detailed reports on trip agendas, meetings with foreigners, and so on. Staff will be required to bring burner phones and laptops when abroad. There are also concerns about Chinese nationals studying overseas.

Such paranoia will be a problem for Chinese companies competing in overseas markets; in additional to deterring travel, it will complicate retaining skilled foreign staff. Laptop maker Lenovo, for example, employs 52,000 people in 160 countries.

That said, China Inc now has a lot of intellectual property, trade secrets and sensitive emails worth stealing. Just because you’re paranoid doesn’t mean nobody is after you. (By Pete Sweeney)