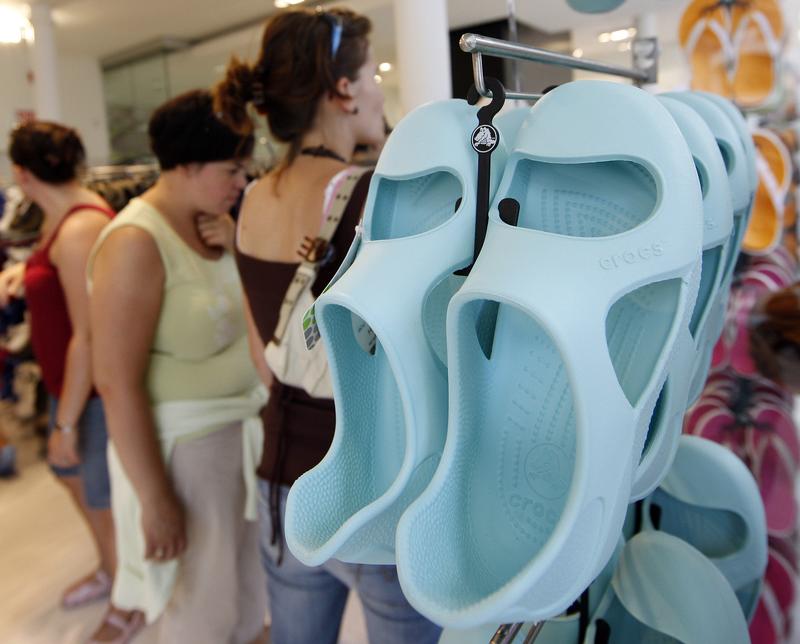 Cushy. Crocs has a bounce in its step. The rubber-clogs maker said on Monday that it expects sales in 2021 to come in around 67% higher than the previous year. Shares have jumped fourfold in the past three years, more than twice the increase at sneaker companies Nike and Skechers USA. The $7 billion Crocs is putting its fortunes to good use.

In December Crocs said it would buy privately-held comfy footwear company Heydude for $2.5 billion. That’s just as the market’s love for Crocs seems to be tempering. Its shares have dropped a third from a November high. Even so Crocs’ enterprise value, at almost 3.5 times sales, is still three times as rich as Skechers’. Crocs would surely prefer to get closer to the valuations of footwear brands with freshly minted shares including Allbirds and On, which trade at 9 times and 15 times sales, respectively.

That’s where Heydude comes in: Its shoes are both cozy and easier on the eye than Crocs’ clunky creations. That could help as workers returning to offices start rediscovering business casual. (By Lauren Silva Laughlin)

Back to school. Private educator New Oriental has laid off 60,000 people, part of a massive wave of redundancies coming out of the after-school tutoring industry after President Xi Jinping converted it to non-profit. The company, whose stock is down 90% since, is casting for ways to reinvent itself, including selling fruits and vegetables online.

That follows an odd trend set by technology peers that have wandered into agriculture. E-commerce giants JD.com and Alibaba and video-games group NetEase have all gone into pig-farming, for instance. That won’t generate much employment for kids lacking animal husbandry degrees.

A broader slowdown in the consumer technology sector is bad news for the nearly 10 million college students mainland universities pour into the jobs market every year. Moreover, Beijing’s latest push into hard sciences, artificial intelligence and so on will demand far more advanced degrees. For now, the official solution is to expand government jobs, but many graduates will have to go back to school or face unemployment. (By Pete Sweeney)

Heroic expedition. Food delivery groups are belatedly serving up a helping of profitability. Delivery Hero late on Monday said it expects the business of dropping off takeaway meals to break even on an adjusted EBITDA level by the second half of the year. The shift reflects Chief Executive Niklas Östberg’s recent purchase of a majority stake in Spanish rival Glovo and his decision last month to conserve cash by pulling out of Germany. The 21 billion euro group now expects its food delivery unit to earn adjusted EBITDA of up to 100 million euros in the final quarter of 2022. Meanwhile, investment in on-demand groceries will peak in the next three months.

Analysts previously expected Delivery Hero to report negative EBITDA of more than 500 million euros this year, and still be in the red in 2023. Those forecasts may now change. It’s part of a broader shift away from the grow-at-all-costs business model. Uber Technologies plans to exit its unprofitable food delivery business in Brazil, Reuters reported last week. For investors who pushed up Delivery Hero shares 6% on Tuesday morning, the switch is overdue. (By Karen Kwok)

Crocs sandals are seen in a store in Quebec City, July 25, 2008. Crocs Inc shares since January were down 87 percent as of Friday's market open in what has been a spate of bad news for the company over the past year, from slowing sales to lawsuits.