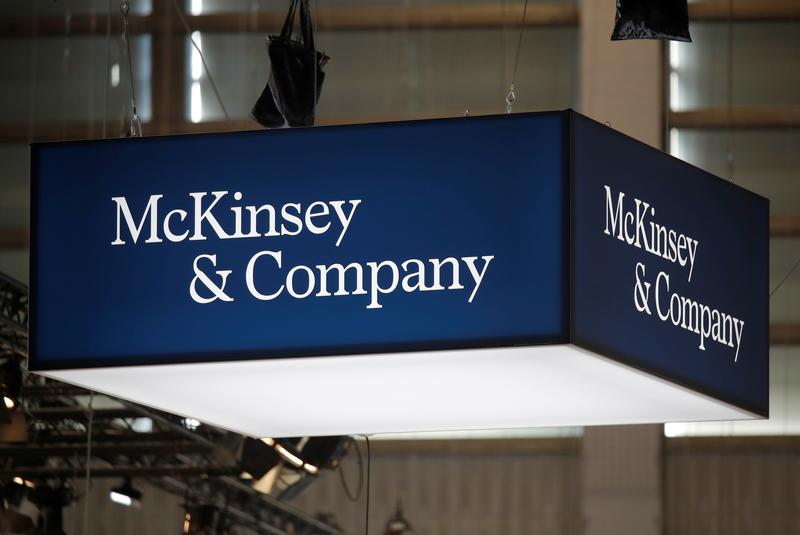 – Too big for partnership

Two faces of arrogance. McKinsey said Wednesday 650 partners had elected Bob Sternfels, a 26-year veteran, as its leader. Replacing insiders’ votes with outside oversight might bring better long-term results for the consultancy.

Sternfels replaces Kevin Sneader, whose steps to improve governance, such as an approval committee for controversial new clients, didn’t help him win him a second three-year term as the firm’s leader. Sternfels brings some consistency and most recently worked with advanced analytics. As data and information – once McKinsey’s edge – becomes more commoditized, the firm will have to hone those skills, and Sternfels can help.

But the bigger problem is how to clean up McKinsey’s act. Aggressive expansion coincided with ties to clients such as opioid manufacturers, the Saudi government, and the Gupta family of South Africa, all of which has brought unwanted attention to the firm. McKinsey’s growing size would make going public, and the accompanying outside scrutiny, useful to avoid further indignities. Someone bearing a fresh set of eyes might have been a better choice. (By Robert Cyran)

But wait…there’s more. The U.S. Securities and Exchange Commission is getting stuck into special purpose acquisition companies. The agency warned investors on Wednesday that they should be wary of celebrity-backed SPACs, noting that “it is never a good idea to invest in a SPAC just because someone famous sponsors or invests in it.” That goes for vehicles sponsored by well-known professional investors, too, the SEC said.

The likes of former House Speaker Paul Ryan and Gary Cohn, previously a Goldman Sachs banker and an adviser to President Donald Trump, can leverage their relationships to land deals. But it’s less clear what, say, baseball great Alex Rodriguez brings to the table. And in either case, fronting a SPAC that does a deal doesn’t mean it is a good deal. The incentives can encourage SPAC sponsors to buy just about anything, at just about any price.

Like a friend who cautions against dialing a 1-800 number at midnight to buy a George Foreman grill, the SEC’s warning is worth heeding. (By Lauren Silva Laughlin)

Bolting the stable door. A New York judge ruled last month that Citigroup cannot recoup some $500 million from creditors of cosmetics group Revlon that the U.S. bank accidentally repaid. Now, banks are inserting terms in loan documents to protect them from similar errors, according to the Financial Times. The new language – included, among others, in a Citi-led loan for pet retailer Petco – requires lenders to return funds sent by mistake.

It’s only a stopgap remedy, though. The judge, Jesse Furman, decided against Citi in part because creditors had no reason to believe the payments were erroneous. That in turn was partly because Furman found – “much to the court’s surprise” – that banks have no standard protocol for giving notice of payments of this kind.

Had the correct figures been clearly communicated in advance, lenders would have known their windfalls were mistakes, and Citi would have got its money back. Replacing haphazard practice with uniform notice requirements might be a cleaner way to avoid a repeat. (By Richard Beales)

Endurance sport. Adidas’s turnaround is a marathon, not a sprint. On Wednesday the German sportswear maker committed to average annual revenue growth of 8% to 10% up to 2025, and an operating margin of between 12% and 14% by then. A plan to sell Reebok will help: analysts at TAG estimate an operating margin of 12% in 2019 without it, rather than the reported 11%.

Still, those are Olympian goals for a company which struggled to take advantage of a boom in home exercise equipment and stretchy clothes during the pandemic. Last year sales fell 14% on a constant currency basis, to 20 billion euros. Puma saw only a 1.4% decline. This heaps pressure on Chief Executive Kasper Rorsted: since his appointment in 2016, Adidas has returned 95% to shareholders, compared to Puma’s 280% or 173% for Nike. Rorsted now hopes to boost the group’s brands, double its online sales, and increase profitability all at once. That will require plenty of stamina. (By Dasha Afanasieva)

Triumphant return. China Telecom looks set to get a strong reception in Shanghai. On Tuesday the state-owned wireless carrier announced plans to sell up to 12 billion shares, equivalent to 13% of the enlarged capital, through a secondary listing on the city’s bourse – two months after being delisted in New York. Investors cheered the decision, sending its Hong Kong-listed shares up as much as 9.8% on Wednesday.

That may look understated once the telco giant goes live in Shanghai – the first of the Chinese companies blacklisted in the United States to seek to do so. The Beijing government can encourage other state entities to buy stock. And China Telecom currently trades at just 8 times forecast earnings for the next 12 months, Eikon data show, compared to 22 times for its closest competitor China Unicom’s Shanghai-listed entity. Closing even part of that gap would handily compensate for its dropped U.S. connection. (By Yawen Chen)

The share decline implies an annual hit of perhaps 29 million pounds of EBITDA, based on ITV’s 9 times enterprise value trading multiple. Given its 20% EBITDA margin, that’s equivalent to 129 million pounds of revenue, or 8% of the company’s forecast 2021 advertising sales. That may overstate Morgan’s true worth, but ITV can’t take his departure lightly: on Monday, “Good Morning Britain” enjoyed a record 32% market share. And with younger Britons turning away from television, its older, wealthier viewers are increasingly valuable. Morgan has a handy bargaining chip in negotiations with potential future employers. (By Ed Cropley)

Speed delivery. Just Eat Takeaway.com boss Jitse Groen’s turnaround is getting further and further away. The Anglo-Dutch meal delivery company on Wednesday said the lockdown helped revenue grow by 54% last year to 2.4 billion euros. Yet the 12 billion euro group is still far from profitable. The cost of investing in a fleet of drivers in the UK contributed to a net loss of 151 million euros, up from 115 million euros a year earlier.

The investment is starting to pay off. Orders in the UK were up 88% in the first two months of 2021. But Groen’s job will get harder from now on. As restaurants reopen, people will want fewer deliveries. And rival Deliveroo will soon be listed, boosting its access to capital. Groen also needs to focus on an even more competitive U.S. market, where merger partner Grubhub is losing market share. A likely imminent sale of the 33% stake in Brazilian startup iFood, worth at least 2.3 billion euros, will at least give Just Eat more firepower. (By Karen Kwok)

The logo of consulting firm McKinsey and Company is seen at the high profile startups and high tech leaders gathering, Viva Tech,in Paris, France May 16, 2019.