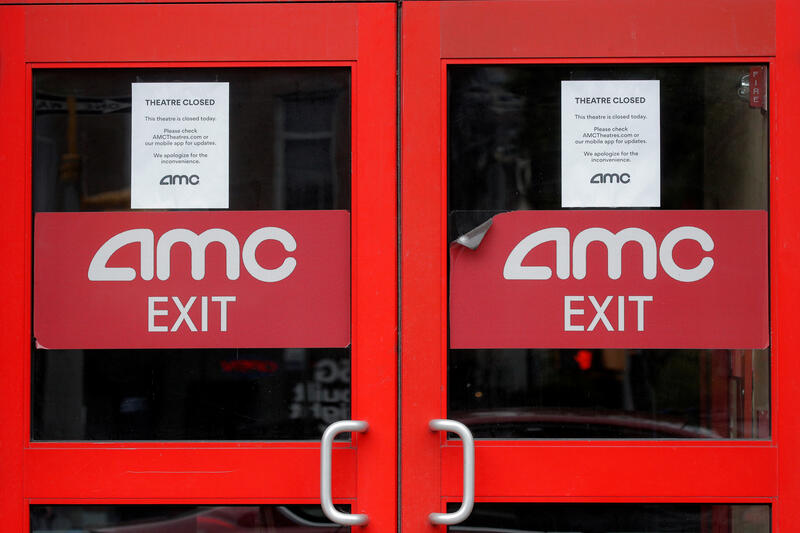 Screen meme. It’s hard to keep up with the plot twists. AMC Entertainment, the movie theater chain that wasn’t far from collapsing last year, is now worth nearly $30 billion after its stock surged again on Wednesday, almost doubling as of 1:30 p.m. ET and bringing the year-to-date gain to around 3,000%.

In part, it’s an overshoot after the dire lockdown situation last year. But AMC has also become a social media-fueled meme stock in the GameStop tradition. The company just took full advantage, raising more than $230 million from hedge fund Mudrick Capital Management at a small premium to Friday’s closing stock price. In a move worthy of Warren Buffett on steroids, Mudrick had already sold its shares at a profit by Tuesday, the same day AMC announced the investment.

AMC is playing to its meme audience in other ways, too. On Wednesday it set about communicating more directly with retail shareholders numbering more than 3 million. The initial incentive, fittingly for AMC share-price watchers, is free popcorn. (By Richard Beales)

Re-lax. A startup niche professional sports league isn’t an obvious winner. Yet New England Patriots owner Robert Kraft and Alibaba co-founder Joe Tsai have ponied up for the U.S. Premier Lacrosse League’s latest funding round. Despite failed past attempts, the PLL has a shot at success.

Star player Paul Rabil and his brother created the league in 2018. Options and health insurance got players onside. Costs are low, as there are few teams and no home cities. The appeal is instead based around online personas. It’s a way to attract a small, dedicated audience via social media.

It seems to be working. The PLL absorbed an older rival league in December. It won’t give figures, but says this funding round came at an increased valuation. Moreover, demographics are at its back. High schoolers playing lacrosse rose by a third between 2010 and 2019. Sure, only about a quarter as many kids participate in lacrosse as play basketball but traditional school sports aren’t growing. Perhaps most important financially, the sport’s preppy base is also well represented on Wall Street. (By Robert Cyran)

Green dreams. As the fate of Icarus reveals, overexposure to renewable energy can have its downsides. Shares in Orsted fell 6% on Wednesday after the Danish wind power specialist unveiled plans to spend $57 billion over the next 10 years. Chief Executive Mads Nipper reckons that besides helping prevent the planet from overheating, it will transform Orsted into the world’s biggest green power company.

Admittedly, Orsted already has a $61 billion market valuation and recognised global leadership in offshore wind, the backbone of its current 7.6 gigawatts of installed renewables capacity. Yet the 2030 target of 50 gigawatts – 50% more than rough UK peak power demand – involves less-familiar technology like solar power and hydrogen production. And the competition is hotting up as oil majors like BP, Total and Shell, and even Exxon Mobil and Chevron, come under pressure to decarbonise. With Orsted trading on over 40 times expected earnings, it’s hard to stop investors focusing on potential negatives. (By Ed Cropley)

Proxy’s proxy. The U.S. Securities and Exchange Commission is giving proxy advisers a nod. Chairman Gary Gensler said on Tuesday that the regulator would consider drafting a new proposal to oversee firms that recommend how shareholders should vote in contentious situations, while not enforcing Trump-era rules on these proxy advisers. He’s on the right track.

The SEC in 2019 introduced rules that aimed to change the way these research firms operate. Some requirements, like forcing proxy firms to disclose conflicts, were helpful. But others risked making their work as a check on corporate boards irrelevant. For example, the new rules required proxy firms to have their views vetted by companies before they were published.

Proxy firms are imperfect. They are often paid by those who have a big stake in the outcomes on which they are advising. But if stakeholders need an example of how they can be useful, look no further than Exxon Mobil, where proxy adviser Institutional Shareholder Services backed little-known hedge fund Engine No. 1’s successful push for board changes. An SEC that’s focused on investors could use proxy advisers as an advocate. (By Lauren Silva Laughlin)

Take private. Bahrain-based Investcorp is delisting from the country’s stock exchange. The move brings an end to more than 30 years of public ownership for the group founded to channel Gulf money into alternative assets. It now oversees $35 billion of buyout funds, property, infrastructure and credit.

It’s easy to see why the firm may be giving up on public markets. Investcorp’s stock is volatile, and often trades at a big discount to net asset value, ascribing little worth to future earnings. That may be partly because it is closely held by management and Gulf nationals and institutions such as Abu Dhabi sovereign fund Mubadala. But it also reflects the challenges of valuing companies that manage illiquid assets like private equity, whose cash flows are lumpy and hard to predict. Investcorp is arguably bucking the trend: Swedish peer EQT, for example, listed in 2019. But its move serves as a warning to any other group looking to take the plunge. (By Neil Unmack)

Biscuit bargains. Confectionery maker Ferrero has bought Burton’s Biscuits, which makes Viscounts, Wagon Wheels and Jammie Dodgers, for 360 million pounds, the Guardian reported on Tuesday. The family-owned Italian group has been a keen acquirer of British sweet brands, like Fox’s biscuits and chocolatier Thorntons, and in 2018 snapped up Nestlé’s U.S. candy business for $2.8 billion.

Burton’s made sales of more than 275 million pounds last year, implying an enterprise value of 1.3 times 2020 sales. That’s cheap compared to Mondelez, which trades at 4 times trailing sales, according to Refinitiv. Stagnant sales might explain this: annual revenue was 340 million pounds when Canadian pension fund Ontario Teachers’ Pension Plan bought the company in 2013. Ferrero may be well poised for more bargains as listed groups like Nestlé are under pressure to divest unhealthy foods. Since Ferrero can shrug off the moralising of public investors, the bigger threat is anti-sugar regulation. (By Dasha Afanasieva)

Wingardium leviosa. Harry Potter’s protective spell over Bloomsbury is losing none of its power. Sales of JK Rowling’s tales of teenage wizardry surged 7% over the last year as children and adults alike sought escape from the reality of lockdowns. Publisher Bloomsbury in turn posted a 31% rise in annual pre-tax profit to 17.3 million pounds. The 280 million pound London-based firm’s shares jumped 10% to a 15-year high after it announced a special dividend.

That provides Bloomsbury with ample protection against would-be corporate predators. Since the Harry Potter phenomenon kicked off 23 years ago, Bloomsbury has delivered 16% total annualised returns to shareholders, including dividends, compared to 4.9% for Britain’s benchmark FTSE 100 Index. The problem for Bloomsbury is what happens when that Potter magic fades. With the stock now trading at around 19 times forward earnings, up from just over 15 times before the pandemic, its valuation is flying as high as a Nimbus 2000. (By Ed Cropley)

Flee market. It’s a good time to be an M&A banker in Australia – contested tie-ups are surging. Colleagues in equity capital markets are having a rougher time. Deals get done, but performance is wanting.

Keypath Education became the latest disappointment on Wednesday. The online-lesson provider’s shares tumbled more than 8% at one point. More than half the 13 companies listing on the Australian Stock Exchange this year with a market value above A$100 million ($78 million) now trade at or below the offer price against an 8% rise in the benchmark index. They include Australian Clinical Labs, meal-kit deliverer My Food Bag and KKR-backed non-bank lenders Pepper Money and Latitude Financial.

That should make the M&A route more appealing. Not at mortgage-settlement firm PEXA, though. Backer Link Administration leveraged bids from KKR and others to get a better deal from stock-market investors. Whether the A$3.3 billion valuation holds up once shares start trading will be another matter. (By Antony Currie)

Worth a flutter. Betting revenue in the world’s largest gambling hub recovered to 10.5 billion pataca ($1.3 billion) in May, the highest this year and close to 40% of May 2019’s total. That suggests punters are keen to revive their vices. Unlike Las Vegas, China’s gamblers lacked legal alternatives such as online wagering during lockdown.

There are other signs good times will return. Hotels were jam-packed during China’s week-long public holiday at the beginning of May: SJM Holdings reported 99% occupancy at one resort. Shoppers brought first-quarter retail sales close to 2019 levels.

That’s not to say the house will always win in 2021. SJM and rivals like Galaxy Entertainment and Wynn Macau are waiting to hear when Hong Kongers will be allowed back to their baccarat. Another Covid-19 outbreak forced the local government to re-impose quarantine on visitors from neighbouring Guangdong.

Casino stocks are up on average just 3.4% so far this year. But bold investor bets may be rewarded. (By Katrina Hamlin)

Extended resistance. Blackstone and Starwood Capital are hoping an extra tip to shareholders of Extended Stay America will get their deal across the line. The private equity firms on Tuesday increased their offer for the hotel chain by $1 to $20.50 a share. The prior $6 billion deal, agreed by the company in March, came under pressure when two leading proxy advisers recommended shareholders vote against it at a meeting scheduled for next week.

It’s the third time Blackstone has checked into the hotel group, and Starwood is its largest shareholder with a 9% stake. The buyout firms’ inside knowledge is a reason for other shareholders to be skeptical. And although billed as a 21% premium, the latest offer only values the company at roughly 14 times its next 12 months’ EBITDA, a big discount to rivals like Hilton Worldwide.

Shareholder Tarsadia Capital urged shareholders to reject the new offer. After first buying Extended Stay in 2004, then again in 2010, twice leaving with a suitcase full of cash, it’s small wonder if Steve Schwarzman’s outfit is wearing out its welcome. (By Lauren Silva Laughlin)

Closed signs are seen on an AMC Theatre during the outbreak of the coronavirus disease (COVID-19), in New York City, U.S., April 29, 2020.